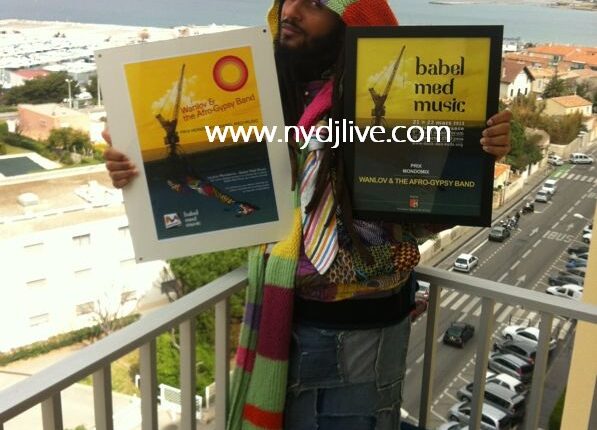 Like the very old cliché, a prophet has no honour amongst his own people. Cherished and adored by a few discerning music lovers in Ghana for his creativity, wit and works, Ghanaian musician Wanlov Da Kubolor’s is much appreciated outside his Ghanaian territory.

A journey that started with the sole aim of being distinctive, educative and promoting the values he really stood for, Wanlov Da Kubolor was honoured with the enviable Mondo Mix Babel Med Music Award on Thursday March 2013 in Marseille, France. Standing tall amongst Sia Tolno from Guinea-Conakry, winner of the 2011 RFI Discoveries Award and 29 other great international artistes who were shortlisted, Wanlov believes this award is one of his greatest yet.

Wining with his African Gypsy album together with his Afro-Gypsy band, Wanlov and his band will be given one year free promotion in the Babel Med magazine and on their website. All news on Wanlov therefore would be made available on the website.

Wanlov also was honoured with the symbol of Marseille from the deputy minister of the region.

Babel Med is the biggest world music magazine for the french world as well as one of thw biggest expos in the world, one that is highly acclaimed by professionals around the world as well as widely appreciated by the general public.

With 15, 000 attendees last year, Wanlov in an exclusive interview confirms to www.nydjlive.com this year’s event has been the “Biggest Babel Med yet”.