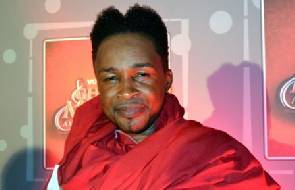 Ghanaian gospel musician Nicholas Omane Acheampong popularly known for his 2012 hit single “Zaphanat Paneah” has been chastised by many in the entertainment world for allegedly calling for the redrawal of the nomination of fellow musician Cwesi Oteng from the Artist of the year category at the upcoming Vodafone Ghana Music Awards.

In an interview with Amanda Jisseh on E-Talk yesterday March 21st 2013, Nicholas Omane Acheampong expressed his dismay at the way the media with the general public has misconstrued his assertion pitching him against fellow Gospel musician Cwesi Oteng. He said,

……………. I never said Cwesi Oteng should be redrawn from the category. I only asked why he could get a nomination for that ultimate category when I (Nicholas Omane Acheampong) had a hit single that went throughout the nation and beyond? Cwesi didn’t even promote his album outside Accra and Accra is not Ghana…………

Asked why he couldn’t cite any other artist than Cwesi Oteng, the Zaphanat Paneah hitmaker said,

………….. It is because he is the only one that shares in the same thing I believe in, that is the gospel. I only used him as an example to show some of us how an album that was only promoted in Accra could secure a nomination in the Artist of the year when I promoted my own throughout the nation. He should teach us the trick…….

Nicholas Omane Acheampong has therefore asked the media and society not to pitch him against Cwesi Oteng but rather ask questions into the Vodafone Ghana Music Awards.

It must be stated that Cwesi Oteng who had earlier on that same show been interviewed according to Amanda Jisseh had refused to stay on the set as Nicholas Omane Acheampong appeared.