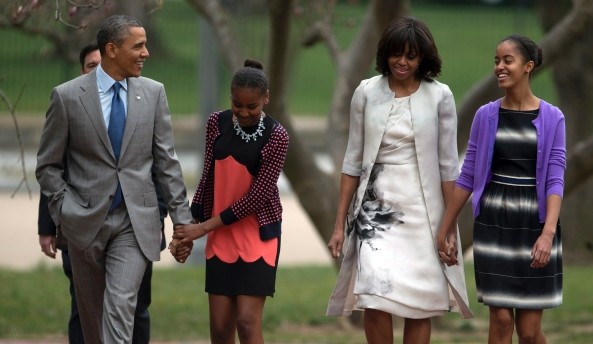 This morning on the “Today” show, President Obama explained the master plan that he and the First Lady Michelle Obama have to prevent their two daughters from getting tattoos.

What we’ve said to the girls is, if you guys ever decide to get a tattoo, then mommy and me will get the exact same tattoo in the same place. And we’ll go on YouTube and show it off as a family tattoo.

And our thinking is this will dissuade them from thinking that that’s somehow a good way to rebel, he said.

Obama may be leading an entire nation and is hands down the most powerful man on the planet, but he still has to deal with the nuances of being a father to tween girls.

The plan is genius and may dissuade the first daughters from getting inked, but we hope not! It would be pretty entertaining to say the least to see our prez running around with a permanent unicorn on the back of his neck or a rainbow on his ankle.

Hate to say it, but I’m secretly hoping the girls go through with it!

They probably will, in fact. Most teens get a tattoo out of rebellion towards their parents, and who could have more reason to rebel than Malia and Sasha.

According to a 2010 Pew Research Center report, 38 percent of Americans ages 18-29 have tattoos. As they become more common, teens look to tattoos as fashion statements and forms of expression.