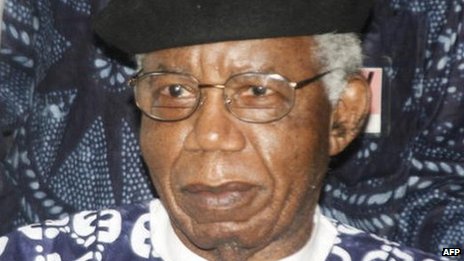 Renowned Nigerian author Chinua Achebe has died, the spokesman for the Anambra state government has told the BBC.

His home state of Anambra, in south-eastern Nigeria, was in mourning for its “illustrious son”, the spokesman, Mike Udah, said.

He had been living in the US since 1990 following injuries from a car crash.

The writer and academic wrote more than 20 works – some fiercely critical of politicians and a failure of leadership in Nigeria.

South African writer and Nobel laureate Nadine Gordimer called him the “father of modern African literature” in 2007 when she was among the judges to award him the Man Booker International Prize in honour of his literary career.

Things Fall Apart has been translated into more than 50 languages and focuses on the traditions of Igbo society and the clash between Western and traditional values.

Analysts say in Igbo society the death of an important person must be announced by someone in authority.

Last year, Mr Achebe published a long-awaited memoir about the brutal three-year Biafran war – when the south-eastern Igbo region tried to split from Nigeria in 1967.

After leaving Nigeria, he worked in the US as a professor. His 1990 car accident left him paralysed from the waist down and in a wheelchair.