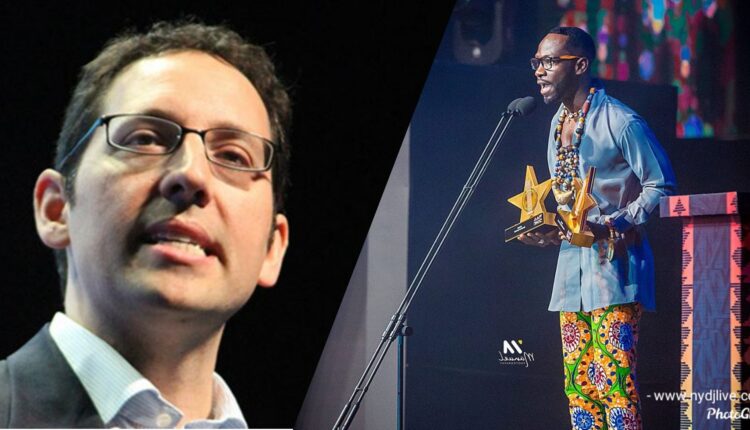 Ghanaian rap artist Kwame Nsiah-Apau also known as Okyeame Kwame is not new to receiving applause, awards and commendations but it’s worth highlighting especially when the Chief Marketing Officer and Executive Vice President of Consumer Business of Microsoft commends him for a feat.

Awarded the  Record of The Year  at the 21st Vodafone Ghana Music Awards for his single Bolgatanga Girl which features Abiana and Atongo Zimba, many have taken time to congratulate the musician whos relevant spans over a period of two decades.

In a tweet,  Chris Capossela congratulated  Okyeame Kwame, a  World Readers literacy advocate for his Record of the Year award for Bolgatanga Girl from his “Made in Ghana” album at the Vodafone Ghana Music Awards!

Congratulations to @Okyeamekwame, a @worldreaders literacy advocate and incredible musician for his Record of the Year award for Bolgatanga Girl from his “Made in Ghana” album at the Vodafone Ghana Music Awards! https://t.co/Y43sL1DYbS

Released in May 2019, Okyeame Kwame’s Made In Ghana album features 10 different artists from all the 10 regions of Ghana. It picks different sounds and sights from all over the country and is set in the post-independence era.

The theme brings rhythms and cultures together through music and videos.