I Will Do Anything to Protect Fuse ODG – Andre Hackett 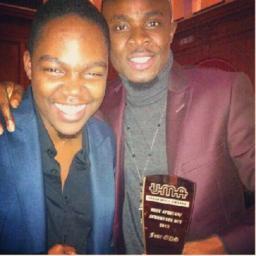 Andre Hackett, proud manager of one of the world’s most patronized artists noted for breaking records and creating a new perception about the African continent through his music has disclosed he would do anything positive to protect his artist.

In an exclusive interview with NY DJ on the Kapital Entertainment Unplugged Show from his base in the UK , Andre Hackett said he owed it an utmost obligation to protect and guide his artist Fuse ODG who doubles as a brother. Andre who was full of praise for his artist also advised managers to be responsible for the day to day activities of the brands they create and disclosed the world is yet to experience the talent of Fuse ODG.

Andre Hackett was an original member of Fuse’s Off Da Ground until he took up the role of an artist manager. He lived and grew up with Fuse ODG in the same neighbourhood.

Some few days ago, Fuse ODG presented his manager with a brand new Mercedes Benz as a birthday gift to appreciate the great works he has done for him, a gesture Andre was so appreciative when he spoke to NY DJ.

Fuse ODG is set to stage his first ever concert in Kumasi on Tuesday December 24th at the Royal Lamerta Hotel.