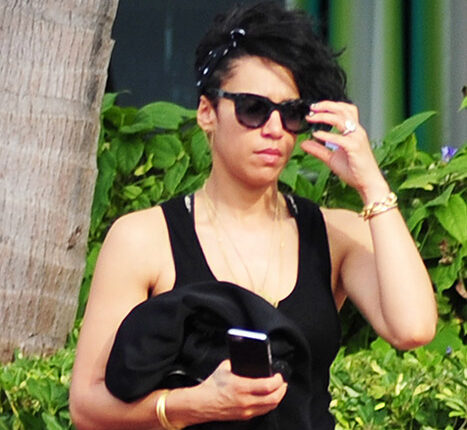 Congrats! Usher is engaged to his longtime girlfriend and business partner Grace Miguel, sources confirm to Us Weekly. The couple have been together since 2009, following Usher’s split from his ex-wife Tameka Foster.

“She’s happy but they’re trying to keep it quiet,” an insider tells Us of the private couple, who looked cozy with one another at the Golden Globes Art of Elysium Heaven Gala in Los Angeles on Jan. 10. Miguel’s ring finger was noticeably adorned with a giant diamond ring at the event.

Usher’s wife-to-be’s ring is so massive, Page Six previously reported “you wouldn’t think it was an engagement ring because it’s so big,” after the couple were spotted ringing in the New Year together at E11even nightclub in Miami.

The 36-year-old singer only recently started opening up about his longtime love. “I have an incredible partner and manager,” he told Billboard magazine in October 2014. “She has helped me through some of the hardest times in my life and my career. She’s someone who’s been able to support and understand all of who I am. Not just as a dancer or as a performer or as a singer, but as a humanitarian and a business man and as a person.”

Usher, who is dad to sons Naviyd Ely and Usher Raymond V, was previously married to Foster from 2007 to 2009.

Toolz: It’s Fine to Be Curvy, But It’s Also Important to Be Healthy