Richard Commey Loses IBF Title After Round Two Knock Out 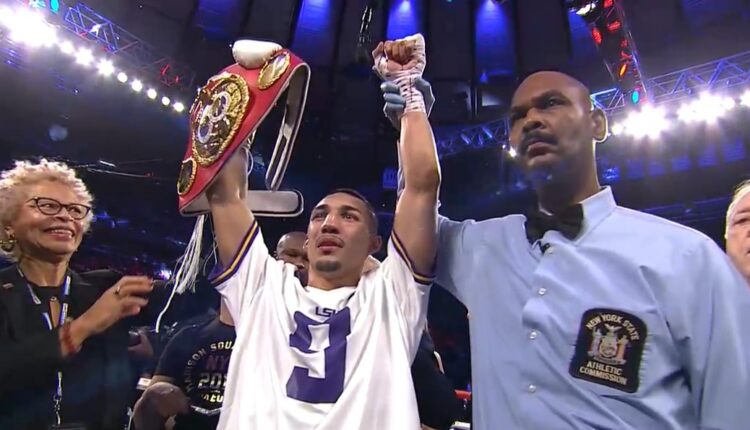 The powerful lightweight barely needed four minutes to knock out IBF lightweight champion Richard Commey in what was supposed to be the toughest test of Lopez’s three-year pro career. Brooklyn’s Lopez (15-0, 12 KOs) dropped Ghana’s Commey (29-3, 26 KOs) with a picture-perfect right hand early in the second round of their scheduled 12-round, 135-pound title fight at Madison Square Garden.

Commey courageously tried to fight out of the trouble once he got up, but Lopez pounced on Commey and forced referee David Fields to stop the fight. Fields stepped in to prevent an upright Commey from taking unnecessary punishment 1:13 into the second round on the Terence Crawford-Egidjius Kavaliauskas undercard.

“I’m at a loss for words right now,” Lopez told ESPN’s Bernardo Osuna in the ring. “This is a dream come true. [Commey] is a bad man. His shot could’ve done the same to me if he hit me with that shot.”

Commey, 32, hadn’t been knocked out before Lopez stopped him. His first two losses were back-to-back, split-decision defeats to Robert Easter Jr. and Denis Shafikov in 2016.

The 22-year-old Lopez hopes he sent a statement to Lomachenko, who watched him beat Commey from a ringside seat. Promoter Bob Arum told BoxingScene.com before Lopez demolished Commey that there’s a “95 percent” chance that the winner would face Lomachenko next.

“You all know who I wanna fight next,” Lopez said, referring to Lomachenko. “2020 is gonna be a big year. ‘The Takeover’ has arrived, and you haven’t seen anything yet.”

A left hook by Lopez caught Commey about 30 seconds into the second round and knocked him off balance. Commey regained his footing, but Lopez later cracked Commey with a right hand that knocked him down to one knee.

A disoriented Commey quickly jumped up to his feet, but he fell down again. He beat Fields’ count, but Lopez quickly attacked an opponent who clearly remained hurt and unloaded a barrage of power punches that forced Fields to stop the bout.

Commey connected with two right hands in the first half of a tactical, competitive first round for both boxers.

Lopez took the IBF 135-pound championship Commey won by stopping Russia’s Isa Chaniev in the second round February 2 in Frisco, Texas. The IBF belt was vacant when Commey overwhelmed Chaniev (13-3, 6 KOs) in their scheduled 12-rounder 10 months ago.

Commey, a two-time IBF lightweight champ, defended that title once between beating Chaniev and losing to Lopez. He knocked out Ray Beltran (36-9-1, 22 KOs, 1 NC) in the eighth round of that fight June 28 in Temecula, California.

Lopez became Commey’s mandatory challenger by beating Japan’s Masayoshi Nakatani in his previous fight. Detractors criticized Lopez for his performance against Nakatani, even though Lopez won that bout by big margins on all three scorecards (119-109, 118-110, 118-110) on July 19 in Oxon Hill, Maryland.