Photos: Shots from The Coronation of Miss Naa Okailey Shooter at Miss World 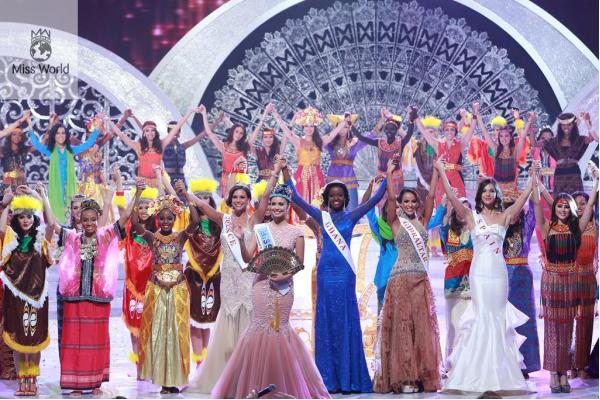 Ghana’s Carranzer Naa Okailey Shooter made history on Saturday, by placing third in a highly competitive Miss World 2013 finals held in the Inonesian town of Bali.

A rare feat that goes into the history books, the event was watched by over 3000, in a spectacular setting held at the Nusa Dua Convention Centre. Over 2 billion people also watched across the world, handing her a unique opportunity to sell Ghana’s image.

She perfectly did, on a night that saw her dazzle her way through history. Wearing a consistent smile throughout the rather tensed atmosphere, she caught the eye of many in and outside the confines of the event venue, splendidly rocking her blue laced-gown.

After nailing her question-and-answer round, it became all too obvious she had made history, taking the fight to the 126 others who took part. Saturday’s achievement and how it’s been received underscores the weight of the Miss Ghana brand, as the most prestigious in Ghana.

Shooter made it to the final five after an initial ten, and was eventually crowned 2nd Runner Up.

Megan Young of the Philippines was winner, while France came second.