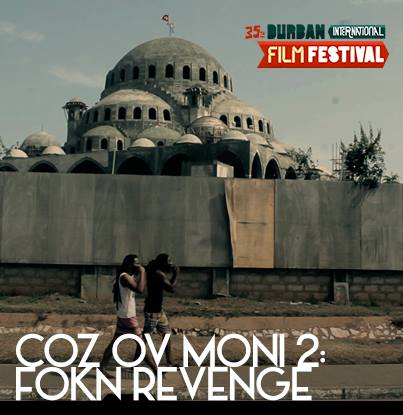 Despite recent publications that no Ghanaian film made it for the 35th Edition of the Durban Film Festival; one of the biggest, oldest and largest film festivals in Southern Africa that presents over 200 screenings celebrating the best in South African, African and international cinemafilm festivals on the African continent, a quick check by www.nydjlive.com has proven otherwise as Ghanaian rap duo, FOKN Bois are already shining in South Africa with their sequel to the first ever pidgin musical Cos Ov Moni 2: FOKN Revenge.

Unlike many films that were submitted during the call for submissions by the organizers of the festival, the group had its film recommended by an Oscar award nominated producer Mike Lerner who took interest in their movie after a screening in Warsaw Poland in May.

According to the documentary stalwart and producer who recently directed Pussy Riot: A Punk Prayer a documentary based on the Russian girl group which demonstrated and were later arrested, the musical, Cos Ov Moni by FOKN Bois was the best film he had watched in his life.

Although the movie is yet to be screened at the film festival, it has been rated above movies such as Half A Yellow Sun and many others by filmmakers present.

As of time of publication, M3nsa, a member of the group was present in South Africa where he would be joined by Wanlov the Kubolor.

The first installment of Cos Ov Moni detailed the follies and foibles of a day in the life of Wanlov the Kubolor and M3NSA, the latest film follows their revenge mission against a gang that ambushed, robbed and left them for dead. The result is eminently entertaining, as uniquely engaging as the music that gives the film its irresistible rhythm.