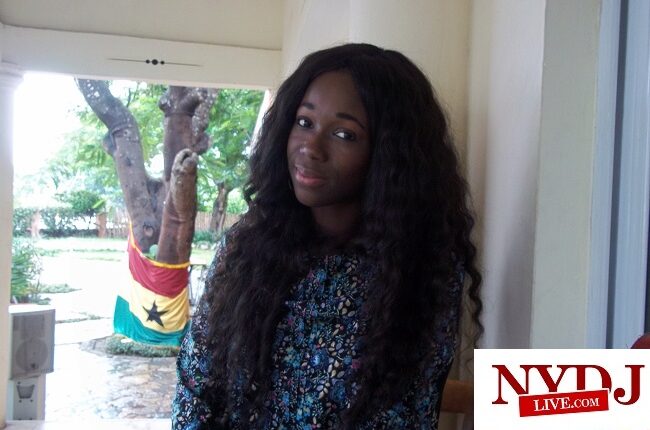 As part of my leave from radio, I took time to visit the national capital of Ghana, Accra where I made time to grant interviews to celebrities you would love to read about and exactly what they have been up to.

First on my list was Ghanaian actress Ama. K. Abebrese so after booking over the phone, I made my way to Café Des Amis close to the French Embassy in Kanda around 10:00am where we both agreed to meet. I had to wait a minute as Ama made time for her post production and hold other meetings before coming over. It is quite normal as my radio experience had taught me.

After some few minutes, my guest finally comes in and characteristic of her, she wears a broad smile that tells me we are good to go. After exchanging our usual Ghanaian pleasantries and she asking why I was in Accra, we got straight to business.

We discussed movies with special emphasis on Beast of No Nation, New Day on TV3, her very recent campaign on skin toning and bleaching and many other things which I would be sharing with you in subsequent articles.

Despite scarcity of news concerning the much talked about $6million budgeted movie Beast of No Nation which features Hollywood actor Idris Elba that was recently shot in Ghana, beautiful Ghanaian actress and host of TV3’s morning show New Day Ama. K. Abebrese opened up to speak about her role and the experience on set with www.nydjlive.com

Read a transcript of a portion of the interview;

Nydjlive: How did you get involved in the movie?

Ama K. Abebrese: I can’t talk about it too much but I went for an audition just like anyone else, they called me back for another audition and was finally had a role after the 3rd audition

Nydjlive: What your role in the movie?

Ama K. Abebrese:  Errrrm, I played the role of a mother, mother to the lead character Agu and I guess that’s the most I can reveal for now (Laughs)

Nydjlive: That means you played a very big role in the movie.

Ama K. Abebrese: Well, I’d rather you wait for the release of the movie (Don’t try be smart NY, wears another broad smile)

Nydjlive: Ok, so share with me the experience on the set

Ama K. Abebrese: I have been blessed to work on a few international productions or productions that feature different people from different parts of the world and this is just another amazing experience and seeing the work that was created. From the little that I’ve seen, its pretty impressive and I can’t wait to see the outcome.

Nydjlive: How was the feeling working with that big cast?

Ama K. Abebrese:  It was a big cast so I couldn’t get to work with everybody but from the little that I did it was actually a nice experience like always. The amazing thing about going on set is that you either make new friends , meet people you admire or you see people you only see on TV. I learnt a lot as well which would help me in any new project.

We however discussed other issues which like I stated earlier would be published in instalments.

Beasts of No Nation is an American war drama film directed and written by Cary Fukunaga, based on the 2005 novel of the same name by Uzodinma Iweala. The film stars Idris Elba.

Principal photography of the film began in June 2014 in the Eastern Region of Ghana. Participant Media and Red Crown Productions are producing while Focus Features will release the film in 2015.

Kim Kardashian shares pictures of her heavy derrière in Bikini