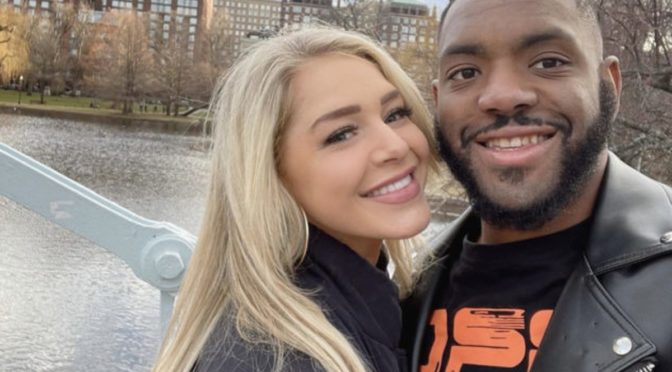 Courtney Clenney, the OnlyFans star better known as Courtney Tailor on social media, has been charged with the murder of her boyfriend Christian ‘Toby’ Obumseli.

The 26-year-old is being accused of stabbing Obumseli at their Miami apartment in April before she went back to posting content on the subscription-based app.

According to the New York Post, Clenney, who has been charged with second-degree murder with a deadly weapon, was taken into custody on Wednesday in Hawaii, and she will soon be extradited to Miami-Dade County where her trial is set to take place.

Her lawyer, Frank Prieto, broke the news in a statement he posted online, saying his client had been in Hawaii for rehabilitation after having struggled with post-traumatic stress order and substance abuse stemming from the fatal incident.

“I’m completely shocked, especially since we were cooperating with the investigation and offered to voluntarily surrender her if she were charged,” Prieto said. “We look forward to clearing her name in court.”

Clenney’s arrest warrant is remaining sealed, the Miami-Dade State Attorney’s Office revealed in their own statement, with further details regarding her detainment expected to follow at an official press conference on Thursday afternoon.

The death of Obumseli made headlines across the world, after Clenney’s legal team insisted that the model was acting out in self-defence following an argument between the pair which had allegedly turned physical.

Quarrels were said to have been common between them, their friends told reporters earlier this year, with pal Ashley Vaughn saying, “we’ve seen her hit him. I’ve never seen him hit her.”

Obumseli had just recently moved to the Edgewater apartment building when he lived with Clenney at the One Paraiso Residences. Neighbours had also told police how domestic disputes between them were happening rather frequently, with police officers often being called to get in between them.

Meanwhile, Jeffrey Obumseli, the brother of the deceased, later took to social media saying he believed Clenney was being treated differently because of her skin colour. “The bottom line is inextricably clear: Courtney is being treated differently because of her privilege as a wealthy White woman,” he wrote in an IG post. “Within 24 hours following Toby’s death, the detective on the case prematurely concluded this was not a crime of violence.”

“We’ve seen videos of Courtney kissing her dogs while covered in what we believe to be my brother’s blood and casually getting drinks at a hotel bar days later while my brother lays in the morgue.”