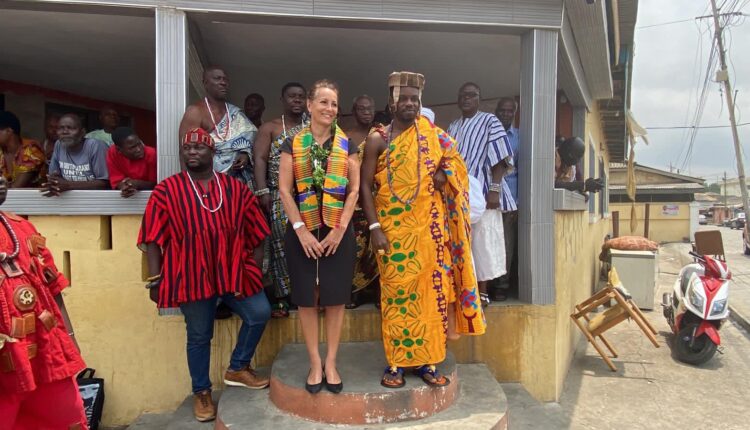 The French Ambassador to Ghana, Her Excellency Anne Sophie has been enstooled a queen mother by the Kingmakers of the Osu stool lands in Ghana.

In line with the customary rites of the people, the enstoolment exercise took place on Thursday, August 11, 2022.

According to reports, she was enstooled a Queen mother for her contribution to the community and the country at large.

“Today I was enstooled a queen mother under the name Naa Narley Owaa Oman I. I was impressed and humbled by the kind words in perfect French of His Royal Majesty Noste Nii Narthey Owuo and the warm welcome from the Council of Chiefs and the people of Osu.

A post shared by HE Anne Sophie (Akosua) Avé (@as.ave)

H.E. Anne Sophie has over the past few years been very visible especially in the Ghanaian creative arts space lending support to many and by so doing endearing herself to the hearts of many.

However, in May 2022, she revealed her tenure was over and would have to report back to her home country, France.

The news took many by surprise as they wished she could stay longer.

“Well, I leave it to my successor to do it because I’m leaving at the end of August… I have been here for four (4) years and I’m going to be very heartbroken but I still have a few months to go and I’m sure there are a few more things coming maybe not as high profile as Accra In Paris, it was quite a huge thing to organize but I’m sure that some people will take over and would want to do Accra elsewhere. I just hope just create a trend to put Ghana out there” she said.

H.E. Anne Sophie Avé revealed there were a number of memories she would carry with her from Ghana.

“I’ll carry so many memories. I’m going to take away the emotion of the people. I love the people here; their kindness, hospitality, the smile. The music translates all that and I’m definitely taking away a long playlist.

She however revealed leaving her office would not mean a total blackout on Ghana as she would return as a tourist since she has a property in Ghana.

“I’m not going forever, I mean I have a property here so I’m bound to come back but as a regular tourist…” she said.