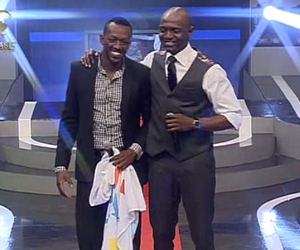 Quite expectant of a typical Sunday evening in the history of the Big Brother Africa, representative from Botswana Oneal has been kicked out of the show tonight.

Oneal was nominated alongside Feza from Tanzania and Bimp from Ethiopia.

Botswana’s Oneal fought the good fight, but unfortunately, when his fate was placed in Africa’s hands, he couldn’t survive the chop.

This evening, the opinionated deejay and model was given his marching orders, leaving his girlfriend and fellow Chasemate Feza, reeling. During his final Diary Session earlier this afternoon, Oneal revealed how he was more concerned about Feza rather than himself. “If it were up to me, we wouldn’t have been Nominated at the same time. I’m worried about her,” he told Big Brother.

As irony would have it, Oneal is out and the other half of the Oneza’s advances towards the Finale. Before Oneal’s Eviction was announced, Head of House Elikem had to reveal his Swap decision. There was palpable tension and of course a bit of exaggerated gasping as soon as the Ghanaian revealed Bimp’s neck was on the line. The Ethiopian, who earlier in the week had a hunch that Elikem put him on the chopping block, smiled a little and awaited his fate.

When IK finally put the Housemates out of their misery and revealed who is going home tonight, Oneal reached for Feza and told her “I love you baby.” There were no tears shed as the Housemates walked Oneal to the Eviction doors. After exchanging a final kiss with Feza, Oneal gave a salute and left the House.