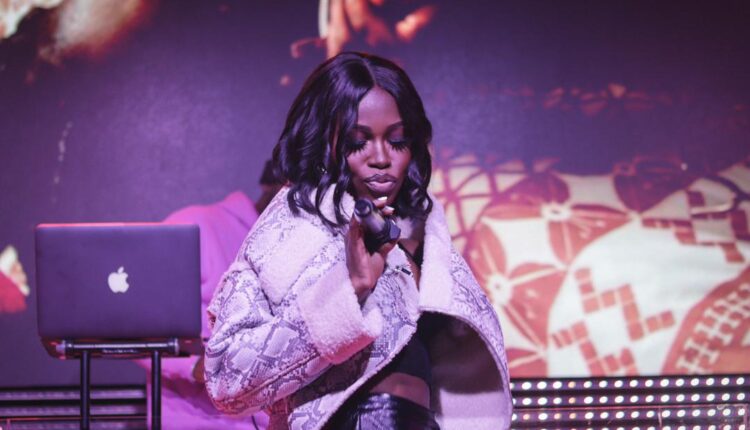 Born Adrien Amponsah on May 27, 1998, in Accra, Ghana, Queen Drie as she is affectionately known is a very talented music artist who currently lives in Chicago, USA.

This young star first stepped into the music world in February 2020 with her debut single Testimony, an afro-pop track which gave listeners a peek into the talent she possessed and landed her an interview on one of the few Ghanaian-owned radio stations in Chicago, WGHC 98.3 FM.

During that interview, the host was mesmerized and even encouraged her to seek a feature with Stonebwoy for the song.

Since then, Queen Drie has remained consistent and released singles like Nana, Nobody, Homosapien, Mama, and Go as well as some features with various artists in Ghana and Chicago.

Queen Drie is very versatile and thus her songs aren’t limited by genres and range from Hip-hop to R&B and Afrobeats. One thing you can always expect from Drie is some very poignant bars. Her fans are in love with her pen game and continuously rave about it online. When asked about her musical influences, she mentioned names like Sarkodie, Kendrick Lamar, Nicki Minaj, Ms Lauryn Hill, J. Cole, and Eminem.

As an independent artist always seeking opportunities for growth, Queen Drie has performed live at various shows in Chicago. She featured on the Summer Jam Rap Show in 2020, opened for Bella Shmurda in Chicago in 2021, wowed the audience at the 2022 Chicago Ghanafest, and recently put on a stellar performance at 2022 All White Bash at Stereo Nightclub in Chicago.

On August 13th 2021, Queen Drie won the Best Female Act at the Afrobeats Entertainment Awards in Chicago. Her talent and charisma have earned her the name ‘The Queen’ among the Chicago entertainment community.

You have probably seen her most recent music video, Nana, being aired on 3Music TV.

According to Drie, this song was created when she visited Ghana in 2021 after being away for almost 10 years.

The local afrobeat sound paired with the relationship problems she was facing were the catalysts which inspired the creation of this masterpiece – a story of love lost without remorse. During her interview with Zee Issahak on Ameyaw TV, Drie said that after coming up with the song while on vacation, she took the opportunity to shoot a music video at the Jamestown Café in Osu, Accra. If you haven’t seen the video on 3Music TV yet, you can watch it.

The Queen’s talent is undeniable and the question we all have is when will the rest of Ghana find out about this next-gen superstar?

Learn more about Queen Drie by visiting her official website https://www.queendrie.com and connect with her on social media: