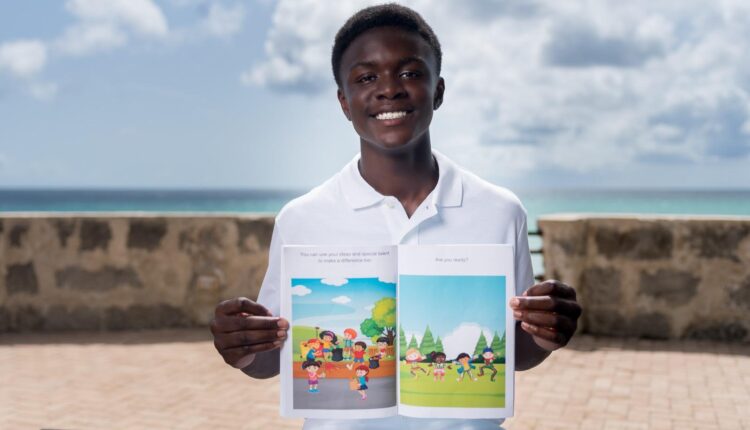 It is said that “train up a child in the way he should go and when he is old he will not depart from it.”

Ghanaian born Adom Appiah is a perfect example of such a child.

The 15-year-old didn’t have a choice about volunteering as a younger child, when he regularly tagged along with his parents, Marjorie and Kofi Appiah, who organized book drives for kids and joined backpack giveaways. They served food to the hungry and delivered Christmas presents to children with incarcerated parents.

But now that Adom, who lives in Spartanburg, S.C., is a teenager, he has a lot more say in what he does with his time. And he’s recently taken his volunteerism to a new level.

Over the past three years, he has raised more than $70,000 for nonprofit groups in his area, in part by organizing annual charity basketball games involving local community leaders, as well as college and professional athletes.

“It’s always been instilled in me to volunteer,” said Adom, a high school sophomore who named his charity project  Ball4Good  and donates the money he raises to various causes, including autism, the homeless and abused children.

Adom was recently awarded a 2019  Gloria Barron Prize for Young Heroes  honoring outstanding young leaders. As one of 15 top winners, he was awarded $10,000 — he’s putting half toward the charity he founded and the rest toward his college fund.

Three years running, the Ball4Good games have attracted sold-out crowds of 800-plus to the gym of Adom’s school, Spartanburg Day School. Just this year, the men’s and women’s Ball4Good games have raised more than $30,000 to support community organizations, such as Boys & Girls Clubs and other groups that mentor and tutor students.

The success of the first Ball4Good game in 2017 led to the development of Adom’s nonprofit of the same name.

“He represents hope for the future,” said Mary Thomas, Adom’s mentor and chief operating officer at the Spartanburg County Foundation, a community organization that promotes philanthropy.

Adom used his connections where he could to get some of the athletes to show up and help him out; a few were from Spartanburg. But he’s not shy about making “cold calls” for charity as well. And he’s Gen Z, so naturally he used social media to connect with one recent Ball4Good game participant, Ianni, whom he also admired for his public speaking about autism.

“I tweeted him and somehow he responded,” said Adom, who invited Ianni to play and speak at the Ball4Good games in April.

Ianni said he was drawn to Adom’s hands-on approach to helping others.

“I couldn’t say no,” Ianni said. “I wanted to help be a part of his mission.” He said he was honored to speak at the event.

“I thought it was a great opportunity for not only me to spread my message of hope and inspiration to others, but to also help Adom’s cause as well,” Ianni said.

Ball4Good sprang from a classroom assignment when Adom was in seventh grade. He and other students were given class time to work on service projects by U.S. history teacher Kelsea Turner.

“I see this kind of learning as a relevant part of a U.S. history class because it provides an opportunity for civic engagement,” she said.

The project Adom ultimately settled on — the charity basketball game — connected two things he is passionate about: sports and community, Turner said.

“He found that sweet spot that drove him to work so hard at it,” she said. “He’s a deeply purposeful guy.”

He’s also really busy. In addition to sports, student government, jazz band and a video game club, Adom twice participated in the Scripps National Spelling Bee. He finished 41st in 2017 and was eliminated before the semifinal round in 2018.

He speaks publicly at schools and community events hoping to encourage other people to become more involved in their communities, and he’s also written children’s books, including one titled “Bouncing Back From Failure,” which he wrote in part from his experience at his second national spelling bee.

Since 2017, Adom and Ball4Good have supported 18 community organizations, including the local  Boys & Girls Clubs of the Upstate; Miracle Hill Ministries, which serves homeless children and adults in South Carolina; the  Project Hope Foundation, which provides services for individuals of all ages with autism; and the  Children’s Advocacy Center of Spartanburg, Cherokee and Union, which helps children who have been abused.

But Adom doesn’t only deliver the cash. He gets involved — just as he did as a younger kid.

He is the youngest board member for the Boys & Girls Clubs of the Upstate and continues to volunteer at other organizations, such as  Children’s Cancer Partners of the Carolinas, which supports families of youths fighting cancer.

Adom says his goal is to expand Ball4Good’s reach beyond the local community. And by encouraging others to get involved, he’s multiplying his impact.

“Adom sets out to make a difference in the world and help kids who are not as fortunate as he is,” said one of his friends, Maxwell Booker, 16, a volunteer for Ball4Good. “He aims high and dreams big.”

Source: By Michael Schroeder  for  Washingtonpost