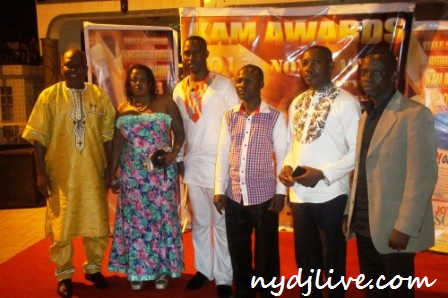 The third successive edition of the Kumawood and Akoben Movie Awards (KAM Awards) nominees’ party was on Saturday November 23rd 2013 held at the Sports Hotel in Kumasi.

The event brought together people from all walks of life including movie enthusiasts, few actors, few actresses, film producers and directors, executives of the Film Producers Association of Ghana as well as members of the media.

Scheduled for 7pm, the commencement of the event was marred by a heavy downpour which has always been characteristic of the previous events held at the same venue until 9:30pm when the event commenced.

Although meant to unleash nominees for this year’s Awards which comes off on the 27th of December 2013, a handful of actors and actresses could be counted as over 90% of nominees including Agya Koo, Kyeiwaa, Kwaku Manu, Mercy Asiedu and a lot more were not present at the event, a development which somehow dinted the beauty of the whole event.

The few present however enjoyed themselves as the man of the moment, Kwadjo Nkansah Liwin took to the dance floor to display some dance moves followed by Akrobeto and Ace radio presenter and actress Naana Hayford.

There were also so many hitches including lack of coordination between MCs, sound problems and an unprofessional DJ who intermittently played his jingles whilst official communications were being made.

Check back this site soon for full list of nominations.