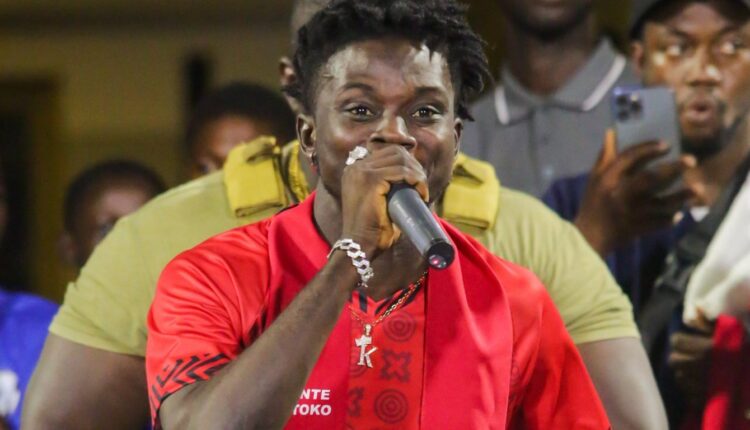 The Rockstar, Kuami Eugene might have travelled the world and performed to different crowds but none beats his recent experience at the coronation match between Ghana’s Kumasi Asante Kotoko and Elmina Sharks at the Baba Yara Sports Stadium on Sunday, June 12, 2022.

A core fan of the club, the musician who cut short his promotional tour in Nigeria for the epic performance in an exclusive interview with NY DJ on Y102.5FM’s breakfast show RYSENSHYNE explained why he had to perform at the game.

“This goes beyond being a regular Kotoko fan even though I’m a proper die-hard fan of the club. This was a national platform” he said.

Kuami Eugene also revealed performing at the Baba Yara Sports stadium was the most difficult he had ever done in his life.

“I’ve done over 70,000 fans before in Sierra Leone. Although this crowd was not up to that number, this is the most difficult show I’ve played in my life. This is the closest fans have gotten to me for obvious reasons. I’ve never seen this before.”

He went on to say;

“Everyone was scared. Dentaa advised I don’t go back but I hesitated. She asked several times if I wanted to do it since it was dangerous and I said YES.

At the time, security couldn’t control the crowd. They had already jumped from the stands unto the field and it was crazy. This is the toughest I’ve had and surprisingly, there were women in this crowd. Some even just wanted to touch my hair. It was actually a beautiful experience …”

Kuami Eugene revealed although he wished he could go on with his performance, officials later advised him against it.

“It was getting tougher and tougher, I had to go. The officials asked I stopped because they were trying to calm the fans down and it wouldn’t work. I performed only three songs although I had about 15 songs to perform.”

Kuami Eugene was the only musician billed to perform at the coronation match which saw Kumasi Asante Kotoko defeat Elmina Sharks by 3 goals to nil.