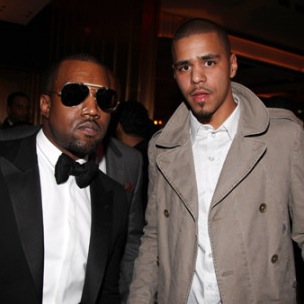 J. Cole may not like first week sales reports but they are in regarding this much-discussed week in Hip Hop. Billboard has released a new report featuring projections for this week, placing Kanye West at the top of the list.

According to the report, Kanye West’s Yeezus will lead the way with 360,000-380,000 copies sold. As expected by many who projected earlier this month, J. Cole’s Born Sinner follows with 150,000-200,000. Mac Miller trails with his latest offering, Watching Movies with the Sound Off, coming in third with approximately 100,000 copies sold.

J. Cole recently said he was not fond of first week sales reports. Via Twitter, the rapper said that they are ruining Hip Hop.

Kanye and Cole will likely have two Rap albums sell over 100,000 copies in the same week, a feat last reached by Nicki Minaj’s Pink Friday and Kanye’s own, My Beautiful Dark Twisted Fantasy in November 2010. If Cole, West and Miller all reach that milestone, it will be the first time three Rap albums sold over 100,000 copies in the same week since 2006, when Jay-Z (Kingdome Come), Snoop Dogg (Tha Blue Carpet Treatment) and Tupac (Pac’s Life) did so.