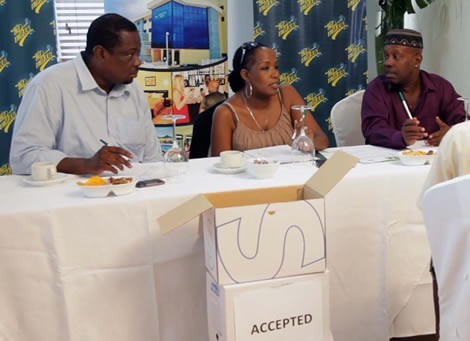 The three judges Bessa Simons, Ofie Kodjoe and Zapp Mallet have been working very hard since the last week of June to cut down on the number of demos received from wannabe musicians to enable them select the ten people who will enter the second season of the MTN Hitmaker television reality show.

It took the judges four days of sitting at the Oak Plaza Hotel in Accra to listen to the over 2000 demos collected nationwide. At the end, a total of 227 contestants were shortlisted and invited to and audition as the MTN Hitmaker competition gets closer to the television screens.

The 31 female and 196 male entrants have since last Wednesday converged at the National Film Institute (NAFTI) at East Cantonments in Accra to perform their songs in real life and to convince the judges to select them.

The shortlisted entrants have been singing without any instruments for the judges to determine how good their voices are. The judges will use three days to listen and then reduce the number from 227 to 40 who will then be joined by the 10 regional winners chosen from the nationwide radio competitions to perform with instrumentation for the final selection.

By the close of business on Friday, July 5th, the judges would be round up their work and would announce who would be among the final 10 contestants (plus two wildcard) to go on television.

Sound engineer and judge Zapp Mallet noted that it wasn’t easy listening to all these songs but he and his colleagues on the panel were able to select the grain from the chaff and they will continue to work hard to bring out the best among the best for the television reality show to begin.

Ivan Quashigah, Chief Executive Officer of Farmhouse Production, the producers of the show, said they were impressed with the high number of demos submitted. “This is an indication of the importance attached to the competition.”

The MTN Hitmaker season two has a prize package of a recording and artiste management deal worth GH¢100, 000.00 for the winner and GH¢50, 000.00 for the first runner-up. The third and fourth-placed winners will also receive some handsome prizes.

MTN Hitmaker will also reward the sound engineer with the best beat on the show and weekly prizes for best performer, Best Appearance, Highest ‘Texters’ and more. Introduced last year, the show aims at identifying, grooming and supporting young aspiring artistes to record their own music and turning them into stars.

The first season was a huge success and everyone saw the wonderful, transformed talents on television for several weeks before the final showdown at the Accra International Conference Centre where Shadrach Adjei alias Naterial beat Miriam, Chiki and Atimbilla to claim the first prize.

Miriam placed second. Naterial and her have since recorded their debut albums titled Mamle and My Testimony respectively. The Hitmaker initiative is championed by MTN and supported by the MTN Ghana Foundation under the auspices of the Youth Empowerment Programme in partnership with the Musicians Union of Ghana (MUSIGA).

This year, the contest is looking for the artistes who can “Move The Nation”.