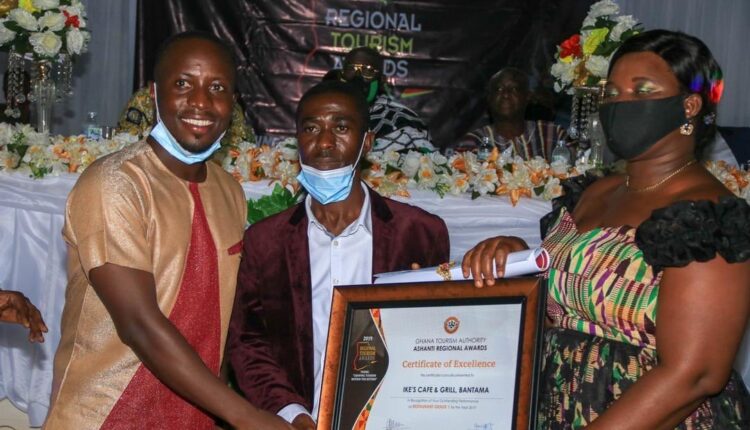 Ike’s Cafe & Grill has been awarded the Best Restaurant at the 2019  Regional Tourism Awards organized by the Ghana Tourism Authority.

Barely 3 years in operation, Ike’s Cafe & Grill beat over 50 renowned restaurants in the city to clinch the enviable spot.

Overlooking a fish pond in the centre of the  Kumasi Cultural Center with its traditional setting,  Ike’s Cafe & Grill has grown to become the toast of the city with hundreds of people (both locals and foreigners) trooping in and out every working day.

3 New Hang Outs To Check Out When Visiting Kumasi

Ike’s Cafe & Grill serves a variety of local and continental dishes and has an enviable line up of engaging activities such as Karaoke Saturdays and WineDown Wednesdays and several others.

One of its flagship meals is the grilled catfish that gets people coming back for more.

Held at the Rattray Park in Kumasi, the awards ceremony saw in attendance several tourism operators, service providers in the region and officers from the Ghana Tourism Authority.

According to the Ghana Tourism Authority, recipients were not only diligent in executing their duties but were also responsible in honouring their tax obligations.

Watch an interview with the CEO of Ike’s Cafe & Grill from beelow.