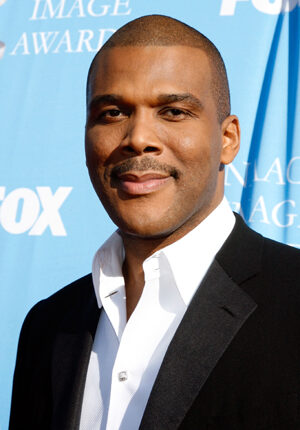 Temptation: Confessions of a Marriage Counselor writer, director and producer, Tyler Perry recently paid a visit to The Steve Harvey Show. During his visit, Steve and Tyler discussed his many accolades and accomplishments as well as plans for the future. When asked what he hasn’t accomplished yet, but hopes to accomplish in the near future, Tyler revealed that he’s just about ready to be a father.

More than anything I think that it’s fatherhood. I know I would be a great father. I don’t want to work this hard. I don’t want to have all of this and not leave it to my children, Tyler expressed as the audience smiled and offered approving nods.

He also said that he realizes his current schedule would probably make parenting difficult.

I also know that as hard as I’m working, doing twenty hours per day, now is not the time. Right now I’m enjoying what I’m doing. I’m enjoying the work. I’m enjoying being a bachelor, so eventually I’ll get there,” he continued.

You can probably guess that tell-it-like-it-is Steve wasn’t going to let him off the hook that easily. He humorously reminded Tyler that he’s not some young cat in his twenties with a whole lot of time to waste.

Now, we done talked about this before. You don’t got all this time you keep thinking you got, Steve said.

Listen, I’m 43, so two more years. By 45 you know who the hell you are, right? You’ve really settled in at 45 so I think two more years,” Tyler said, attempting to bargain with big brother Steve.

Of course, Steve continued to poke fun at him.

When the boy is 15 and you 60… Steve said before looking at the floor, allowing his words to settle.

I’ll hire someone to take him to the basketball court. That’s what I’ll have to do, Tyler responded before the two shared in what appeared to be a good laugh.