Five Sail Through to Finale of Rap Basement Competition 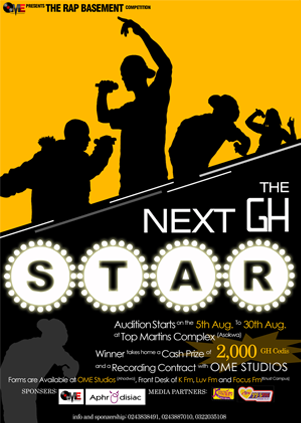 After several weeks of rigorous and intense auditions to arrive at a winner of the Rap Basement competition rolled out by OME Studios, a Kumasi based record label, two groups and three individuals have sailed through to the finale which comes off on Saturday September 7th 2013.

The Rap Basement competition which was rolled out several months ago saw many upcoming and talented musicians display their rap skills and vocal abilities at the DSTV offices in Kumasi.

Supervised by ace broacaster Nana Benyin Anumel of Multimedia Group of Companies, Ebenezer Donkoh of Kapital Radio & HypeUp Ghana as well as Tony, CEO of OME Studios, the judges had a tough day arriving at a finale five who would battle it out till a winner is adjudged.

The competition seeks to unearth natural and creative talents and nurture them into good brands for mainstream music.

Fuse ODG, Atumpan and others Nominated for MOBO Awards