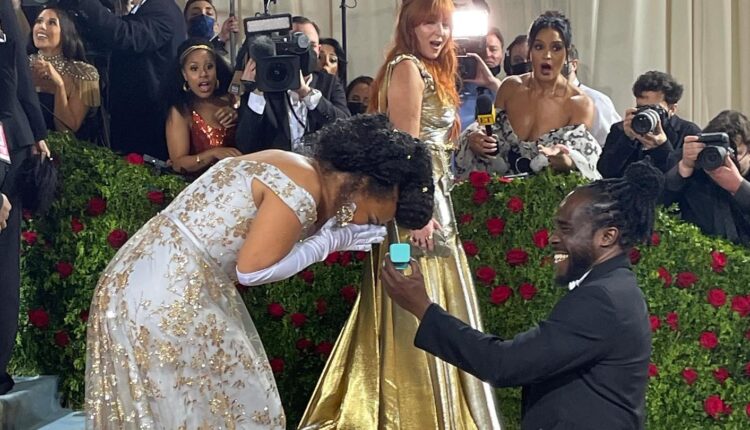 It was the stuff rom-coms are made of: On the red carpet at Monday night’s Met Gala, a surprise proposal took place.

Laurie Cumbo, the commissioner of New York City’s Department of Cultural Affairs, got engaged to her partner, former New York State Assembly candidate Bobby Digi Olisa, amid all the swirling action. Seizing a golden, glamorous opportunity, Digi Olisa dropped to his knee and asked Cumbo to marry him as she ascended the famed steps.

Cheers broke out on the tricoloured carpet, and Cumbo, who was appointed by Mayor Eric Adams, went on to tell Entertainment Tonight that she didn’t see it coming.

Cumbo isn’t the first to say “yes” on the Met’s red carpet; rapper 2 Chainz proposed to his longtime girlfriend Kesha Ward (for the second time) at the gala in 2018, and Donald and Melania Trump became engaged at the Met in 2004.

Congratulations to New York City Commissioner of the Department of Cultural Affairs @CommishCumbo and Bobby Digi Olisa who got engaged on the #MetGala red carpet tonight. ❤️✨ An amazing moment on an amazing night! pic.twitter.com/A8Uy5vRxUK

The betrothal represented a moving, full-circle moment for Cumbo. “I was an intern here when I was 15 and came to the Met Gala,” she said. “Now I’m coming back with my now-husband as the commissioner for the Department of Cultural Affairs.” Met 2023 wedding, anyone?