Clap-back! Chrissy Teigen Hits Back At Trump After He Called Her ‘Filthy Foul Mouthed Wife’ 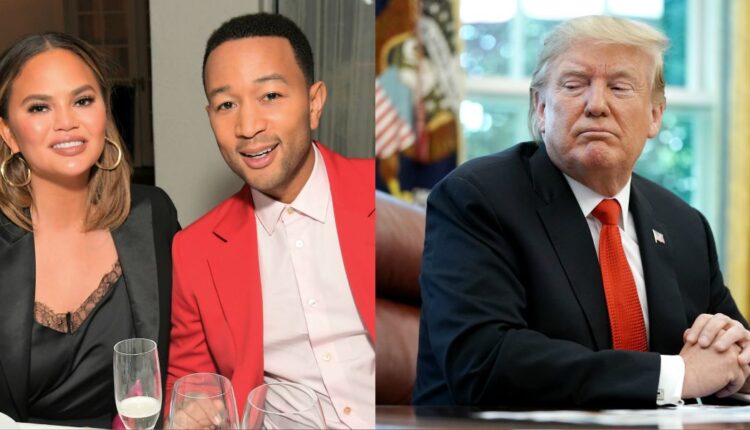 Chrissy Teigen and  John Legend have not shied away from expressing their disdain for the current president, Donald Trump. So, when the president took a cheap jab at them on Twitter last Sunday night, the two wasted no time in responding — with Teigen’s clapback spawning a new viral hashtag in the process.

“When all of the people pushing so hard for Criminal Justice Reform were unable to come even close to getting it done, they came to me as a group and asked for my help,” he tweeted. “I got it done with a group of Senators & others who would never have gone for it. Obama couldn’t come close.”

Going into his critique of Legend and Teigen, Trump, in a sexist tone, wrote, “Musician @johnlegend, and his filthy mouthed wife, are talking now about how great it is – but I didn’t see them around when we needed help getting it passed.”

Take a look, below:

….musician @johnlegend, and his filthy mouthed wife, are talking now about how great it is – but I didn’t see them around when we needed help getting it passed. “Anchor”@LesterHoltNBC doesn’t even bring up the subject of President Trump or the Republicans when talking about….

…..the importance or passage of Criminal Justice Reform. They only talk about the minor players, or people that had nothing to do with it…And the people that so desperately sought my help when everyone else had failed, all they talk about now is Impeaching President Trump!

After seeing the tweet, which mentioned his handle, but not his wife’s, Legend chimed in, begging the first lady to step in:

Imagine being president of a whole country and spending your Sunday night hate-watching MSNBC hoping somebody–ANYBODY–will praise you. Melania, please praise this man. He needs you.

Teigen, however, took a more direct approach that saw her receive tons of praise, and inadvertently started a new hashtag.

lol what a pussy ass bitch. tagged everyone but me. an honor, mister president.

the absolute best part of his tweet is I literally didn't speak in the special, nor was I mentioned. I'm cackling at the pointless addition of me because he cannot not be a bitch pic.twitter.com/9ZkV7bh4FA

Her tweet led to #PresidentPu**yA*sB***h trending on Twitter, and the couple even joined in on the fun.