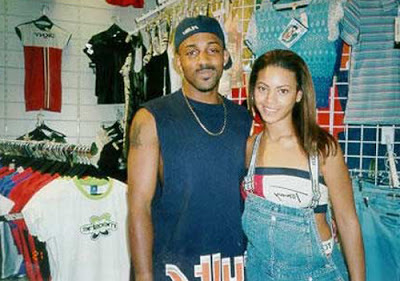 Just as we all have exes we see and feel great because we look better than them presently or regret not staying with them and making the best out of them, so does Beyonce’s first boyfriend, Lyndell (now a chef) who who dated  for 9 years and never had sex with her though (so might be true Jay Z met her a virgin).

In a recent interview with The Sun, he opens on his love for her and why he regrets cheating on her 5 times…..says she would have been his if he didn’t cheat on her…

Beyonce was the love of my life and I was hers, so losing her is still my biggest regret. She would say to me all the time, ‘I’m afraid to ever live my life without you Lyndall, I want you to be mine for ever’.
I’ll be honest — it was me that messed everything up and lost her for ever to Jay Z, but I deserved it.
Who cheats on a woman as beautiful as Beyonce? Well, I am that man and it’s something that’ll always haunt me

How he met Beyonce

Met Beyonce through Kelly Rowland during a church youth group session when he was 13, and she was 11.From the first time I saw Beyonce I couldn’t take my eyes off of her. She looked like an angel, the most beautiful girl I’d ever seen. We’d hang out after school and almost every night we’d fall asleep talking to each other on the phone.

On not knowing Beyonce could sing

She was just so shy, she was a bit of an outcast at school and didn’t even sing in the choir. For two years I didn’t know she could sing. We spent hours watching movies together and playing Connect 4.Some of our most fun times was when I watched Beyonce, her sister Solange and Kelly performing dance routines. So while I had no idea how good her voice was back then, I certainly knew she could move.

On their first kiss

It was just after Beyonce’s 15th birthday. I surprised her with Brian McKnight concert tickets and it happened that night. I had got popcorn and as we were sitting in our seats I dropped it. As we both went down to grab it we bumped heads, and locked into our first kiss.
We both just looked at each other realizing there was this incredible spark of fireworks between us. It was that fairytale kiss you only hear about in the movies. That was the first feeling of true love between me and Beyonce. Still, to this day, I’ve never had another kiss as passionate as that one.

The bigger star she became, the more I didn’t think I was good enough. One night, when she was out of town, I went to a bar with friends and ended up sleeping with another woman. Over the course of a few years I cheated on her about five times, but I never told her until after we broke up.

She was such a great girl who cared about me deeply, she even wrote her hit Dangerously in Love while we were together. That’s how in love we were back then. Initially my intention was to take a break from our relationship so I could go to culinary school and make a name for myself. But when I headed to Austin to do the course she quickly moved on with her own life.Once she began dating Jay Z, I knew we were doomed and I could never win her back. But I know that no matter what, she will always love me. I will always wonder ‘What if?’ and, given all we shared, I’m sure a part of her must feel the same way.