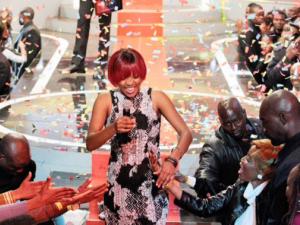 Tanzanian Housemate Feza has become the 20th Housemate to be booted out of The Chase.

As soon as Live Show Presenter IK made the announcment, she hugged her fellow Chasemates. She walked out of the House as they cheered her on. When she stepped on stage, IK jumped into the big question, “Do you love Oneal?” She answered: “Yes I do,” without hesitation. She also shared that there is still an element of distrust between them. IK also asked her about Oneal’s initial attraction to Cleo. “I will let that slide because I wasn’t there,” she replied.

Over the past eleven weeks she has established herself as one of the most polarising Housemates in the Big Brother House. You either love her or you hate her; there is no in between when it comes to Feza. But today her journey in The Chase has come to an abrupt end.

As she exits the House, Feza takes along with her all of Tanzania’s hopes and dreams. Her fellow country-mate Nando made a sudden exit from The Chase when he got Disqualified for violating the Big Brother Africa rules two weeks ago.

The Tanzanian’s departure follows hot on the heels of her man Oneal’s parting from The Chase. Before he was booted out last week; Oneza was the most talked about couple in Big Brother The Chase and Feza’s Eviction today, begs the question: “Is Africa against couples in The Chase?”

In the past we have speculated about ‘The Curse of The Couples’ and this curse looks to be real, now so more than ever. The last couple left standing is Beverly and Angelo, will Bengelo face the same fate as the other couples of The Chase?