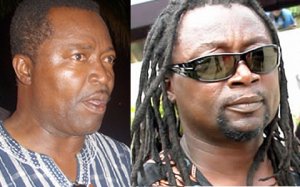 Legendary hi-life musician Amandzeba Nat Brew and veteran actor David Dontoh have been dragged to court by a non-governmental organization for failing to account for some amount of GHc125,000 belonging to the NGO. Africa Awake 2010 and its Executive Director, Mr. Kwame Wadaada sued the two entertainment personalities to account for the money which they allegedly withdrew from the NGO’s bank account without authority.

Myjoyonline.com’s checks at the courts indicate that the NGO filed a suit at the Fast Track Division of the High Court on July, 22 2013 asking Messrs Amandzeba and David Dontoh to render accounts as to what they used the money for or refund same if they fail to do so. Africa Awake 2010 is claiming that in May 2010, it received a Public Private Partnership sponsorship to the tune of GHc150,000 from the government of the late President John Evans Atta Mills. The money was to be used for the establishment of a project dubbed the Atta Mills Legacy Project, Myjoyonline.com’s investigations have revealed. Africa Awake 2010 claims that out of the GHc150,000, an amount of GHc145,000 was deposited in the NGO’s Stanbic Bank account (Acc. No. 0140002631901) with Mr. Kwame Wadaada, Africa Awake 2010, Amandzeba Nat Brew and David Dontoh as signatories to the account. The claimants say that except for an amount of GHc19,500, which they were aware was spent on various projects, Amandzeba Nat Brew and David Dontoh made “unauthorized withdrawals” between May 24, 2010 and June 10, 2013 to the tune of GHc125,000 without their knowledge. Myjoyonline.com’s sources at the court said Amandzeba Nat Brew and David Dontoh were served notice in May 2013 to refund the money with interest within 14 days or face legal action but they failed to do.