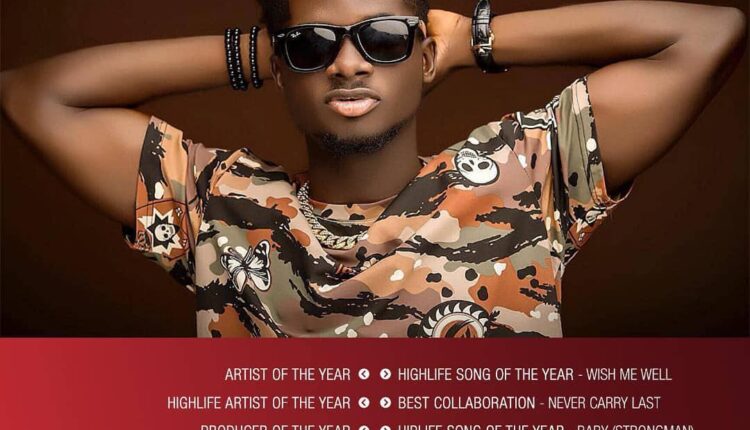 On Friday March 15, 2019, the nominees for the Vodafone Ghana Music Awards were announced.

As expected, the list has received massive reviews barely 24 hours after release with many including fans, music lovers, entertainment pundits and others sharing varied opinions via social media as at to who deserved to be in which category or otherwise.

Well, whatever it is, we do know some of these diverse opinions would come up but our (Ghana’s Hub For Pop Culture & Urban Entertainment News – www.nydjlive.com) focus today is to share with you some fun facts and statistics we have put together about the 2019 Vodafone Ghana Music Awards nominees list.

Headed by Richie Mensah, Lynx Entertainment as a record label leads the 2019 Vodafone Ghana Music Awards with the most number of nominations. With 3 top of mind artists dominating the music industry in the year under review, Kumai Eugene, Kidi and MzVee had a total of 22 nominations.

Well, his return is not really ‘new’ as he was nominated in the 19th edition of the awards scheme but this time, he has fully ‘reconciled’ with the organizers and ENDORSED the awards scheme.

He grabbed 9 nominations this year.

Big things about to happen 🔥🔥 Thank you madam Theresa C.E.O of Charter House Ghana !! VGMA 20years celebration and I am happy to be part of it … 🙏🏽🙏🏽🙏🏽 @charterhousegh

With six (6) albums nominated for this year’s Vodafone Ghana Music Awards, it is quite heartwarming to know that two of the nominated albums, Reign by Shatta Wale and Untamed by Samini all made it to the Billboard album charts.

Before you go wild asking if the Vodafone Ghana Music Awards has been merged the Ghana DJ Awards, just take a breather.

Yes! Two of Ghana’s finest DJs, MicSmith and Vyrusky had their works nominated in two different categories of this years awards.

5. Sarkodie Maintains Lead As Most Nominated VGMA Artist Ever

Could we have wrapped up the fun facts about the VGMAs without mentioning this record?

Ghanaian rap artist and CEO of SarkCess Music continues his lead as the most nominated artist ever at the Vodafone Ghana Music Awards as he grabbed 12 nominations in this year’s edition. These included collaborated works and features.

Together with his label mates Akwaboah and Strongman, SarkCess Music had 19 nominations in various categories.

EXCLUSIVE: VGMA 2019 Nominees Jam To Be Hosted In Kumasi