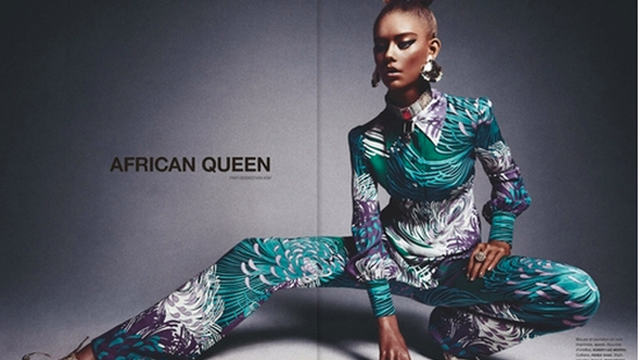 Here we go again. Here’s 16-year-old white model Ondria Hardin; she’s doused in a very deep bronze in an editorial for Numéro magazine called “African Queen”. Ugh. Foudre makes the excellent point/sums it up with, “why hire a black model when you could just paint a white one!”

Maybe it’s because the magazine just couldn’t find a black model? Maybe there are none, and it’s just not a profession that appeals to anyone but young, tall, skinny, white girls? They’re probably the only ones who enjoy traveling around the world and getting paid tons of money to be pretty? I know, I know, modeling is much more than that — don’t listen to me, I can barely smize! — but you get the point. It appears diversity also floundered at NYC’s fashion week this year, with over 82 percent of the models being white.

However, the same agency that represents Ondria Hardin has several black women in their pool. It’s a much (MUCH) tinier pool than the amount of white models they represent, but it does exist. And if none of those women are quite right, there are about a gazillion other places to look. There’s no excuse for using a barely 16-year-old white girl in an “African Queen” spread.

It’s impossible to look at this and not ache for young women of color who want to pursue careers in modeling (and arguably, fashion by extension). When they don’t see themselves on the runway or in magazines, it could be very easy for them to think, “huh, I guess modeling isn’t for me.” Then the status quo remains, and the runways remain monotone. If jobs for “African Queen” photo spreads aren’t going to black women, what hope is there?

Wow!!!! The £13 mobile: Nokia unveils cheap handset you only need to charge once a MONTH