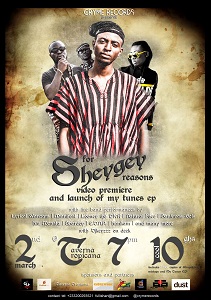 In 2010, Ghetto Reps released the critically acclaimed “Behind Bar” Mixtape album which featured numerous established and upcoming artists namely Wanlov, Bra Kevin, Klu Monsta, Joey B just to mention a few and with hit songs like “Queue”, “I don’t fear U”, Kiss me Quick” just to mention a few.

After the success of “Behind Bars”, LyricalWanzam started work on his first solo project titled “The Afropolytank Mix-Tape”. The album released in 2012 was an instant hit and has since received massive air play on a Czech Republic radio, throughout Ghana and on the rest of the continent.

“Afropolytank” is an eclectic and conscious    hip hop album, with positive themes and concepts but delivered with witty, funny and intricate “punchlines” and metaphors in pidgin and a mixture of various Ghanaian   dialects.  The album is currently available in stores in Accra and also on-line for download.

Having worked with various acts in Ghana such as M.anifest, Mensa, Wanlov, Sankwas Bois and performed on various stages across Ghana, such as the just ended Indie Fuse music festival, the 2011 Chale Wote Street Art Festival in James Town, Ecxtreme LyricalWanzam is definitely one of the acts to keep an eye on and under his label Cryme Records and the management of Fullish Art, Wanzam is most certainly set to break into the mainstream music industry by the end of 2013.

Wanzam’s journey from underground into mainstream Ghana music industry starts with première of his first music video for the smash hit single “For Sheygey Reasons”(http://www.reverbnation.com/wanzam) with M.anifest, on the 2nd of March 2013 at Taverna Tropicana, with guest and performing artists such as Manifest, Iwan, Natural Face, Sankwas Bois, Klu Monsta and more.

The night of the video première is also to launch “MY TUNES EP” by Looney the TKR (too known rapper) a.k.a African man.  Looney, born Anthony Dotse is also an original member of ghetto reps and is famous for his smash hits songs and videos,  1+1=3 which  received a nomination for the 2012 4syte video awards and D.O.A(death of azonto) under his label Cryme Records