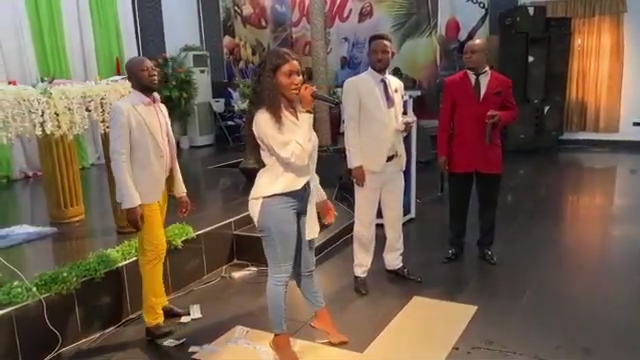 Days after singer Wendy Shay tasked her followers and all Ghanaians to remember her in prayers, the  Masakra hitmaker has found herself in the church.

This comes after one Prophet Akwasi Appiah, during one of his services said the singer would be kidnapped for 21 days and later killed for rituals.

The prophecy attracted lost of comments with many people condemning the pastor’s words and the way he delivered his message.

Wendy Shay was not troubled about the pastor’s comment saying it is not right for people to attack him. She wants people to pray for the prophecy to be averted.

Sharing a video of the prophecy on her Twitter handle, the ‘Uber Driver’ hitmaker explained that God reveals to redeem.

“I have seen this video circulating and a lot of ppl are insulting the man of God..pls stop cos God reveals to redeem…remember me in ur prayers and pls if anybody has his number kindly inbox me Isaiah 54:17 #Mosthigh,” she wrote.

The singer made it to the prophet’s church on Sunday to minister.

These Are The Two Products Nana Ama McBrown Will NEVER Advertise