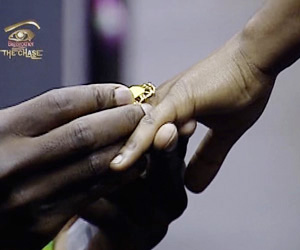 Hakeem and Cleo have been fondly referred to as Hacleo while Feza and Oneal have been continually called Oneza by fans across Africa because of the affection these couples have expressed towards each other in The Chase.

Could their love be written in the stars though considering that both couples will be getting married for this week’s Task after a wholly random selection?

Well, word is that Beverly is the one that had the yellow bow tie but quickly swapped with Cleo upon seeing that Hakeem has the yellow ring – sneaky! Wonder if Hakeem knows this.

After realizing that she had picked a red bow tie and her man Oneal had a red ring, Feza screamed; “It’s meant to be, it’s meant to be.”

In Big Brother All Stars we saw Namibia’s Meryl and Tanzania’s Mwisho taking vows live in the House before the whole of Africa. The couple’s relationship continued beyond the House.

In the same Season, All Stars winner Uti from Nigeria and Kenya’s Sheila aka Shuti had a special connection in the House but didn’t want to jinx it so they waited until they were out of the game to announce that they were together.

It looks like Evicted couple Koketso and LK4 are still going strong too after being booted out of The Chase together and maybe there’s a future for Bolt and Betty as well as the Ethiopian lass was determined to wait for her man. Now that they are both out there, we wonder if they have made contact.

Today we see Hacleo and Oneza swimming against the tide to make their relationships work in The Chase. This being a fast paced game, there have been ups and downs in their journey but this being a week of all things merry, will they realize the need to seal their love for good?

Are this week’s weddings simply a coincidence or fate?

Okyeame Kwame Describes His Fall As “Best Unfortunate Act Ever”