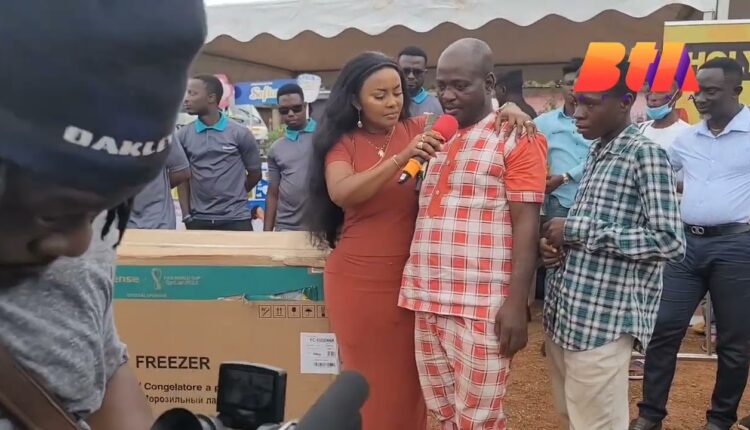 As part of her 45th birthday celebrations, Ghanaian actress Nana Ama McBrown organized a free National Health Insurance Scheme (NHIS) registration exercise for 1700 people predominantly, the aged and children in Kwadase, a suburb of Kumasi where she grew up.

The exercise which took off beautifully suddenly took an emotional turn when the actress met an old classmate who had gone blind.

Although the actress would not allow the classmate to narrate his entire ordeal, she offered to support him after the old classmate narrated how he had made frantic efforts to reach out to her but to no avail.

The actress who had promised to give out freezers and a couple of items then gifted the blind classmate who is currently unemployed one of the freezers and promised to pay for his house rent which had expired.

She also promised to do more for the old classmate.

Watch the emotional moment Nana Ama McBrown gave out the freezer and promised to pay off the rent of his old classmate.

Kofi Adoma’s Wife Collapses After Being Tailgated By Unknown Assailants