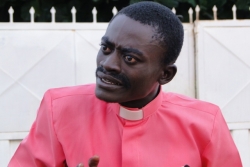 Despite several calls on Ghanaian musician Guru to withhold promotion of his new single Akayida which seems to project the influence of the militant group Al Qaeda with regards to the semblance of the pronunciation of the names, an official video is already to enhance it’s promotion.

Guru has however denied any intentions of promoting the militant group but rather a dance.

Davido Presents Winner of the ‘Skelewu Dance Competition’ With $3,000