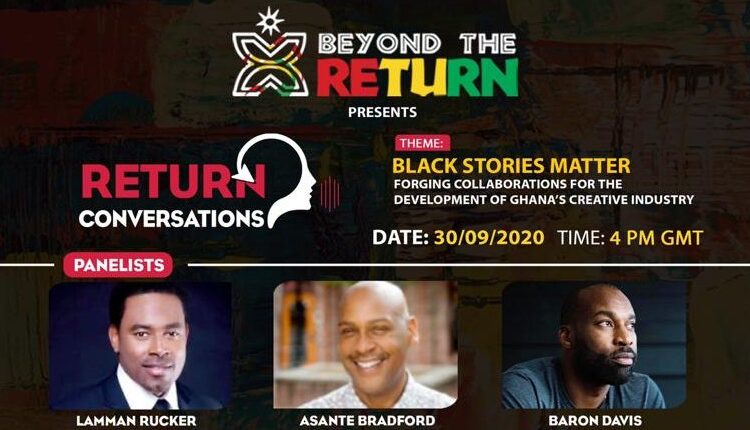 The Creative Arts space in Ghana will on  Wednesday, September 30, 2020, see a one of a kind masterclass.

The Ministry of Tourism, Arts and Culture, in collaboration with the Creative Arts Council, Beyond the Return Secretariat and the Bridge Zone Africa, presents a much-needed masterclass aimed at giving life back to the space in Ghana.

Under the theme  Black Stories Matter: Forging Collaborations for the Development of Ghana’s Creative Industry, a tall line up of international speakers and experts have been listed to impart knowledge and share experiences.

Shelby Stone is an Emmy winning, Golden Globe and NAACP winner producer who is currently the President of Production for the Narrative Film Group, formerly known as Freedom Road Productions, Common and Derek Dudley’s company.

Baron Davis is an entrepreneur, investor, and two-time NBA All-Star and record-holder, over a thirteen-year career.

Etu Evans is a shoe, clothing and accessory designer, interior design consultant and philanthropist. Etu Evans has made a name for himself as a tastemaker to celebrities.

Vassal Gradington Benford III is an American music mogul, film producer and investor.  Benford has stamped his indelible imprint on the music scene as one of the world’s most prolific producers in the entertainment industry today.

RJ Bucaria is Co-Founder and C.E.O. of Prolific Media Holdings LLC. He has been a trusted advisor and consultant to companies ranging from top Fortune 100 with over US $300 million in revenues to start-ups.

Professor Eleanor Earl is a film and television content producer, entrepreneur and educator who has an unwavering commitment to making the world a better place through education, entrepreneurship and the creative arts.

Asante Bradford is Project Manager for Digital Entertainment and Media for the Georgia Department of Economic Development, the sales and marketing arm of the State of Georgia.

Philonese West Is a Celebrity Hair Stylist with over 30 years of experience in the hair care industry, having worked in Hollywood, Atlanta, South Africa and many others Philonese has travelled Internationally teaching Natural Hair Care with Aunt Jackie’s including The UK, South Africa and Nigeria.

Chris Roland is an award-winning American producer, director, and writer living and working in Cape Town, and has been involved in 80+ productions.

The event will be streamed live at 4 pm on Facebook and Instagram on @beyondthereturn, @Ghanatourismauthority and @yearofreturn and will be broadcast live on Hitz 103.9FM.

In 2019, American showbiz stalwarts Michelle Rice and AJ Johnson also led two masterclasses in Ghana – one in Accra and the other in Kumasi.

Missed that? Watch video from below.