Tiger Woods and Lindsey Vonn: What Happened Behind the Scenes at Masters Weekend 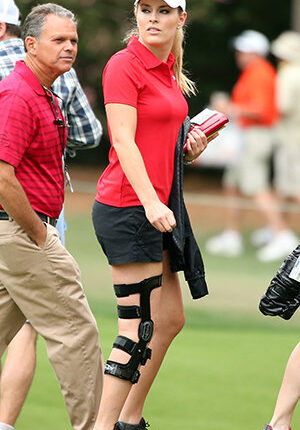 Tiger Woods may not have taken home a green jacket Sunday at the Masters, but he did have a good consolation prize waiting for him in the clubhouse: girlfriend Lindsey Vonn.

The 28-year-old Olympic champion cheered on her beau — and even dressed like him.

Lindsey sported a red polo and black shorts to match the golf pro, who traditionally wears a red shirt during the closing round of tournaments. While Woods wore black pants, Vonn opted for a shorter and more feminine version of her boyfriend’s ensemble.

Sources tell omg! one important person gave the couple a thumbs up over the weekend in Augusta, Georgia, where the golf tournament took place. Tiger’s mother, Kultida, was seen bonding with Lindsey from the sidelines all day Sunday.

“Lindsey spent a lot of time with Tiger’s mom,” a source tells omg!. “It looked like [Kultida] really enjoyed her.”

The feeling seemed to be mutual.

“When he hit a good shot, they would get excited and cheer together,” an onlooker tells omg!. “It was really cute. They were both waiting for him together after Tiger signed his scorecard.”

And it’s a good thing they’re getting to know each other as the relationship between Tiger and Lindsey seems to be progressing — quickly.

“Even though their relationship is new, it seems like it is getting pretty serious,” the source says.

A second insider agrees: “Things seem to be getting serious fast.”

The weekend certainly had some dramatic moments. Tiger received a two-shot penalty on Saturday for taking an illegal drop on the 15th hole during Friday’s second round. Many thought he should be disqualified after a call from a viewer prompted officials to review the shot.

Spin on: The DJ Pizaro Story