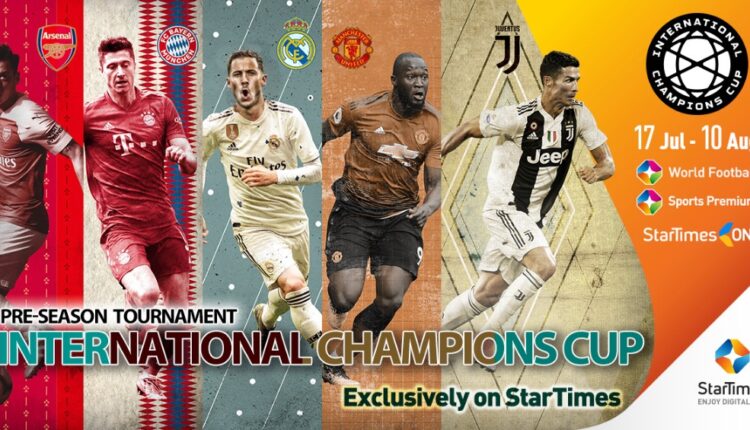 StarTimes is set to broadcast the 2019 edition of the International Champions Cup from July 17 to August 10.

Africa’s top Pay TV service provider, StarTimes has over the years given cherished viewers access to the pre-season tournament which seeks to outdoor new signings and give fans what to expect from the players in the coming season.

The tournament, which originated in 2013, also serves as a platform for some of the biggest clubs in football to play club friendlies around the world (almost becoming a mock-Champions League for international fans to enjoy).

The International Champions Cup (ICC) boasts of the two largest crowds in U.S. soccer history, the only Clásico ever played on American soil and a list of former champions as regal as any tournament in the world: Real Madrid, Manchester United, Juventus, Inter, AC Milan and FC Bayern. A roster of top scorers that includes Cristiano Ronaldo and Robert Lewandowski. This year, it includes 12 of the world’s most iconic and influential clubs such as Real Madrid, Bayern Munich, Manchester United, Juventus, AC Milan, Inter Milan, Arsenal, Tottenham Hotspur, Atletico Madrid, Benfica, Fiorentina and Guadalajara of Mexico.

StarTimes is ICC tournament’s exclusive broadcaster for Sub-Saharan Africa and all 18 matches will be live and in HD on StarTimes World Football channel 245 and Sports Premium channel 246.

Ghana, United Arab Emirates, 5 Others A Part of Countries That Can Now Visit South Africa Without Visa

3Music Awards 20: This Is Why Kofi Kinaata’s Song of The Year Win Is The…