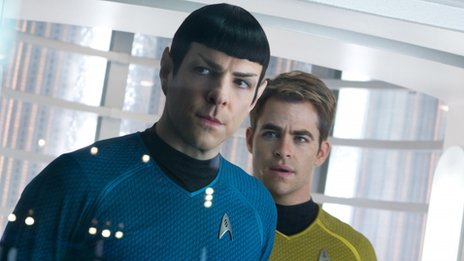 Star Trek Into Darkness has topped the US box office but failed to beat the opening weekend of the previous Star Trek film.

Into Darkness knocked Iron Man 3 into second place with $35.2m (£23.1). The Great Gatsby dropping to third.

The director rebooted the franchise, opening it up to a wider audience beyond traditional Star Trek fans.

It doesn’t seem to have the same kind of cross-over appeal as say an Iron Man or some of these others.

It’s a very specific brand, but I think the general public would love this movie, because it’s such an action movie. But to get a hundred-million-plus opening weekend, unless you’re Twilight, you really have to cross over to all audiences.

Film company Paramount said they were optimistic that good reviews and word of mouth would bring in a broader audience in coming weeks.

The film made $40m (£26.2m) internationally and Don Harris, Paramount’s head of distribution, said they were satisfied with the film’s performance worldwide.