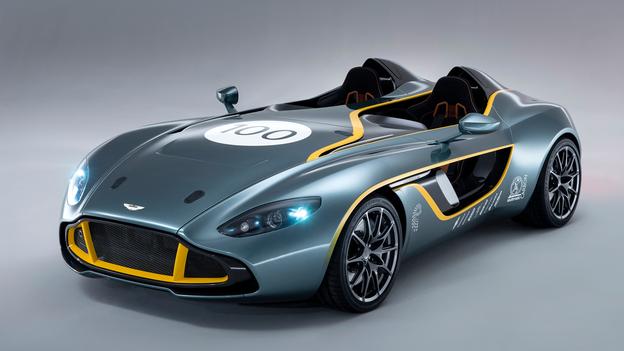 After a brief tease on its Facebook page, Aston Martin revealed the dramatic CC100 Speedster Concept this weekend, and gave the rakish two-seater – along with more than 100 other Aston Martins – a celebratory lap of Germany’s famed Nurburgring race circuit.

A centennial birthday present to itself, the CC100 is designed to celebrate the British automaker’s storied history and, specifically, to evoke the marque’s all-conquering DBR1 racing car from 1957 (which, naturally, was part of the aforementioned Nurburgring lap, driven by none other than British racing legend Sir Stirling Moss).

The roofless, door-less, windscreen-less CC100, crafted entirely of carbon fibre, is not a small car, measuring some 14.5 feet nose to tail and 6.5 feet from mirror to mirror. No surprise, the Speedster takes its motivation from a 6-litre V12 engine, matched to a paddle-actuated six-speed sequential manual transmission. Aston claims the car will sprint from zero to 62mph in a tick over four seconds, and press on to an electronically governed top speed of 180mph.

“CC100 is the epitome of everything that is great about Aston Martin,” said Aston Martin’s chief executive, Dr Ulrich Bez. “It represents our fantastic sporting heritage, our exceptional design capability, our superb engineering know-how and, above all, our adventurous spirit.”

Beyond suggesting that the Speedster’s wild style may inform the design of future Aston Martins, the company has announced no specific production plans for the CC100. The notion is hardly unthinkable, however. In 2009, Mercedes-Benz unveiled a radically revised version of its SLR McLaren supercar, inspired by the famed 1955 300SLR racer. The company crafted a scant 75 examples of the door-less, windscreen-less SLR McLaren Stirling Moss edition, priced at 750,000 euros and available only to existing SLR McLaren owners in Europe. It is a business case that could work well for Aston Martin.

Miss Ghana Organizers Explain Reasons For A One Time Audition