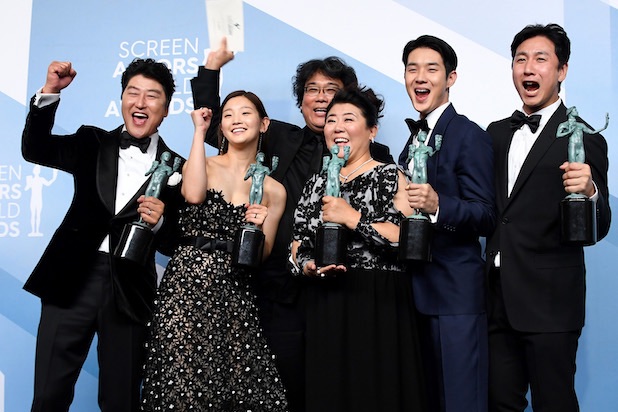 “Parasite” made history as it became the first foreign-language movie to win SAG’s coveted best ensemble prize on Sunday night, capping a 26th annual ceremony that otherwise closely followed the script in terms of the individual victories.

The event’s most surprising element might have been the acceptance speeches, which were virtually devoid of politics, other than  Robert De Niro’s remarks in receiving a life achievement honor.

The win for “Parasite” broke up what had been a night that saw people of color entirely overlooked, as the industry comes under increased scrutiny for a lack of diversity in its awards.

“I’m so honored to receive this award in front of such amazing actors that I admire. I will never forget this beautiful night,” cast member Song Kang Ho said through a translator.

Five members of the 10-person “Parasite” cast were on stage to accept the award.

Director  Bong Joon Ho  was shown proudly recording the cast’s win from his seat in the audience.

The guild awards are watched closely for clues on how the Oscar race might turn out, but the perceived Oscar frontrunner, the World War I epic “1917,” doesn’t really lend itself to the “ensemble” designation, and wasn’t among SAG’s nominees.