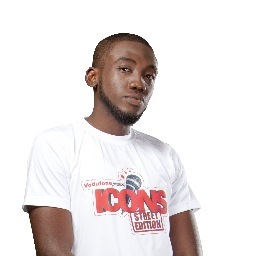 Tipped by many to win the Street Edition of the Vodafone Icons despite huge competition from other finalists, Kumasi based musician Ryan says his eyes are set o the ultimate prize and nothing else. In an exclusive interview with www.nydjlive.com, Ryan expressed appreciation to Ghanaians and most especially the numerous support garnered from his home base, Kumasi.

The live recording of the grand finale of Vodafone Icons – Street Edition which takes place at the National Theatre on Thursday, September 5 will see one of the final 4 contestants are ready for it pick up the ultimate prize package valued at GHC 250,000.

The four finalists Ryan, Budda, Kelvin and Marion all gave a sweet account of their journey on Vodafone Icons season 3 at a press interaction ahead of the finale and were pleased with the knowledge, training and exposure they have received from appearing on the show.

The prize package includes a brand new Kia Sportage, Samsung products and a recording contract with one of the world’s biggest record label, Universal Music. Gerrard Foster, Head of New Business Development – Sub Sahara Africa at Universal Music Group said that he was excited about partnering with Vodafone Icons and explained that, the partnership would offer the winner of the contest the widest network for distribution, via the world’s biggest record label.