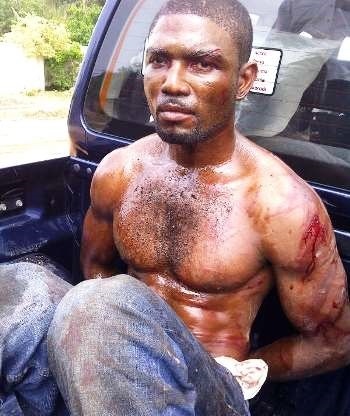 An intriguing robber on Tuesday morning packed every single item in the home of Kofi Kum Bilson, celebrated mid-morning presenter on Peace FM, while the presenter was live on radio.

Unfortunately, the robber was not able to leave with his booty, as curious neighbours saw him, raised the alarm, gave him a hot chase and finally caught him and brought in the police.

As if it was a movie, one of the curious neighbours who helped in catching the robber was actor and movie producer Roger Quartey of Roger-Q Productions.

I was on my way from Ben Brako’s house when I saw the robber so I helped in catching him. Ben stays just beside Kofi Kum Bilson so I raised the alarm to attract more people and I policed the house to ensure he does not escape.

The actor was said to have chased the burglar. The two jumped over several walls and big gutters until he was eventually caught.

He was jumping over walls from house to house because he wanted to escape, but I followed him. How can I jump over walls with this my big stomach? But I chased him anyway, I won’t deny that I helped in catching him.

The robber was eventually sent to the Teshi Police Station where he was been processed for court.

He was said to have driven to Kofi’s house Tuesday morning, broken into the rooms and packed every single item into a waiting van.

He was about driving out of the compound when a curious neighbour questioned him and realized there was something untoward about his demeanour.

The robber eventually fled when another neighbour joined in questioning him but he could not go too far, as his chasers caught up with him.