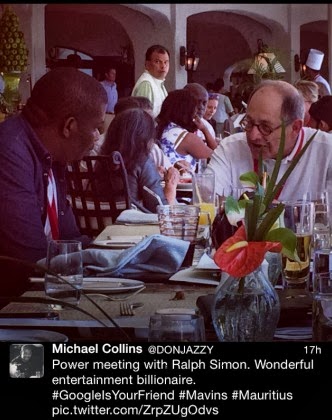 Nigeria’s multi talented musician and producer Don Jazzy is not taking lightly the music business as he meets up with one of the most successful entertainment entrepreneurs and moguls Ralph Simon in Mauritius during the African Leadership Network.

Ralp Simon is a co-founder of the independent Zomba Group of music companies (now a subsidiary of Sony Music Entertainment) in the 1970s. He was also Executive VP of Capitol Records and Blue Note Records in Hollywood and started EMI Music’s global New Media division. He started Yourmobile (later renamed Moviso), the first ring tone company in the Americas, Europe, UK, Australia and Africa, in 1997.

Don Jazzy also gave an inspiring speech at the summit.