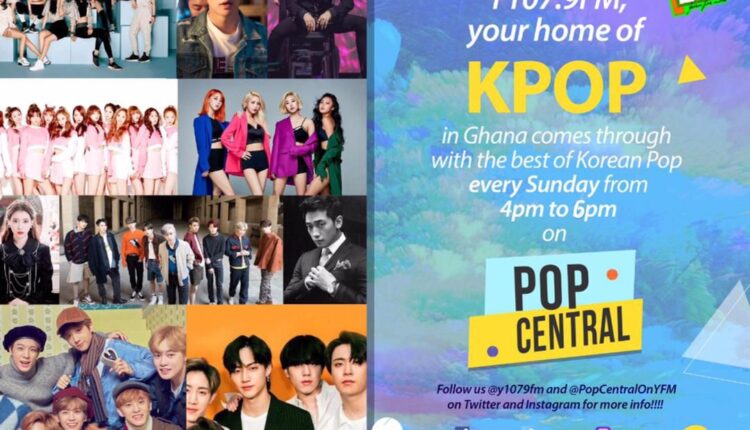 Pop Central on YFM is a 2-hour radio show that features a mix of worldwide pop music and is the first and only radio show in Ghana dedicated to the promotion of Korean Pop (KPOP), becoming one of the fastest-growing KPOP shows in West Africa.

Also known as the Home of KPOP in Ghana, Pop Central airs every Sunday from 4 PM to 6 PM GMT, hosted by Winston Micheals and produced by Ella Okunmwendia.

Pop Central was introduced in 2018 to celebrate 10 years of YFM, born out of the growing popularity of Korean Pop globally and a plea from KPOP fans in Ghana, especially fans of KPOP group EXO, to hear their favourite Korean songs on the radio.

Pop Central began airing on the 4th of November 2018 as Pop Up. In preparation for its first episode, the show set a record with its first Twitter poll accumulating about 102,000 votes, over 12,000 retweets and 7,000 likes in 24 hours.

Pop Central is known for its “KPOP TOP 12” playlist which sees 12 Korean Pop songs played based on Twitter polls or requests.

Every week, the Pop Central team picks 16 songs from a theme and puts up 4 polls on its Twitter account (@PopCentralOnYFM), and the top 3 songs from each poll are played during the show.

Request of the Week/ Team’s Pick

In addition to the ‘KPOP TOP 12’, Pop Central takes requests from listeners and KPOP fan bases on Twitter.

For shows with no requests, the Pop Central team selects 2 songs to add to the KPOP playlist. These songs could vary from weekly new releases, songs from Kpop artists celebrating their birthdays or anniversaries, or one artist which barely makes it past the polls.

Every 3 months, the Pop Central team holds a ‘Quarterly Hits’ poll in a bid to select the best songs released in the last 3 months. Out of the many songs released, only 12 can make it past 2 rounds of keenly-contested polls to feature on the ‘KPOP TOP 12’. What makes the ‘Quarterly Hits’ poll different from regular polls is the selection of the Top 2 songs with the most votes, as compared to top 3 from each poll.

Occasionally, the Pop Central team seeks the help of its audience to curate playlists to mark special occasions, like its anniversary. The team also takes charge of the playlist once in a while.

In its bid to promote the various KPOP artists, the home of KPOP in Ghana joins forces with the Twitter fan base of a Kpop artist for a special show, seeking to highlight the artist. Takeover episodes feature an audience-curated playlist all from the artist as well as conversations about the artist.

The first edition of the takeover was held on the 11th of October 2020, through the collective efforts of Shinee World Africa and Shinee Africa Radio, fan bases of KPOP group Shinee.

The second edition, geared towards the promotion of Super M, was held on the 24th of January 2021 in collaboration with Nova News and co-hosted by Sadah Espii Proctor.

Aside from hosting takeovers with fanbases, Pop Central has hosted Ghanaian media personality based in South Korea, Sam Okyere, on the show. The special edition was followed by a fan meeting for fans of the TV presenter and actor.

KPOP DJ from Maine in the US, DJ Jon, also appeared on the show, bringing a different twist with his fast-paced mixes.

Pop Central is hosted by BBC-recognized presenter, voice-over artist, and musician – Winston Michaels. Associated with Bet Planet as a brand ambassador, he doubles as a co-creator of the show alongside executive producer Ella Okunmwendia. Ella is a producer and journalist who has worked with several international media organizations like Der Spiegel and the BBC. She recently joined the NCity Podcast, a fanmade podcast aimed at promoting KPOP group NCT, as a co-host.

Backing the team is a group of Korean Culture Enthusiasts and content producers who double as the founders and creators of Kimchi & Kenkey, a brand which seeks to create a liaison between the Korean and Ghanaian culture. The team consists of Dr Araba Dawson-Amoah, Joella Abena Nuer, Clara Selorm Doku, and Edinam Ama Amekpleame.

The sound of the show is handled by Kafui GH, a prolific sound engineer and producer who specializes in radio jingles, sound editing, audio mixing and mastering.

Tune in to Pop Central every Sunday via YFM’s website yfmghana.com or internet radio platforms such as Simple Radio, Tune In and Radio Garden. After the live airing of the show, the episodes are uploaded to Pop Central’s Soundcloud account (https://soundcloud.com/popcentral) “PopCentralOnYFM.”

Connect with Pop Central and stay up to date with all its activities. Give them a follow on Twitter and Instagram @PopCentralOnYFM, and listen back on Soundcloud.