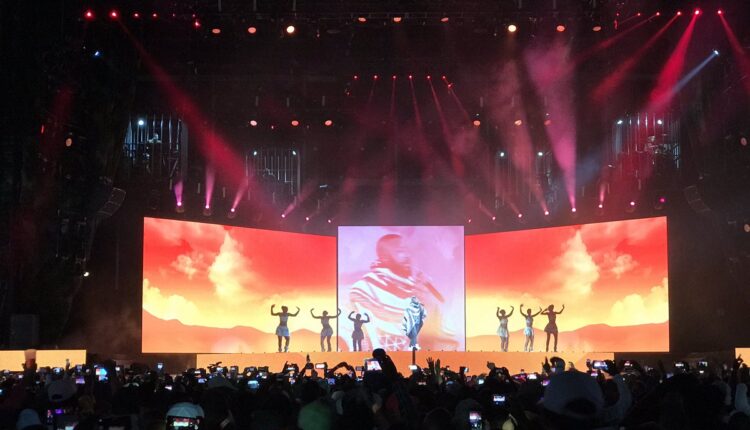 Starting off with a tweet and daring to do something many dare not thing of, the Mama I Made It hit maker gathered 68,000 people at the FNB Stadium, also known as Soccer City and The Calabash located in Nasrec, bordering the Soweto area of Johannesburg, South Africa on Saturday December 2 2017.

With this, Cassper Nyovest officially becomes the first South African hip-hop artist to ever hold a concert at the FNB Stadium and receive such an electrifying turn out.

The 28-year-old set out to more than triple his audience members from his first ‘fill up concert’ by filling up Africa’s largest stadium.

From selling out all the golden circle tickets to bringing in a crowd large enough to literally fill out the stadium – which has a capacity of 75 000 – Cassper did indeed made history.

Not only was the golden circle filled to capacity but by 21:00 the other seating areas had a significant amount of concertgoers. This is not to mention the crowds who were outside the arena and could not get in as gates were already closed.

This was an emotional moment… whole stadium singing along and realizing it started with a tweet for the Dome and now we here. Well done Refiloe @CassperNyovest #FillUpFnBStadium pic.twitter.com/CCPIdcgied

In 2015, Cassper Nyovest started off this journey by gathering over 20,000 fans at the Ticket Pro Dome in Johannesburg.

Watch: @CassperNyovest using his platform to encourage the youth to preserve and promote African arts and culture. #FillUpFnbStadium pic.twitter.com/6Qr96lzZn2

King @CassperNyovest making history, showing South Africans we can never dream too big, we can achieve anything and that hard work pays off.

At the time, not many believed he could actually do it, simply because it was something that has never been done by a local artist before – let alone a hip-hop artist. The Doc Shebeleza rapper proved everyone wrong and went on to bring in a crowd of 20 000 – making South African history by selling out a venue of that capacity without the help of an international act.

Just when everyone thought he had achieved his goal he announced that he would take a step further by attempting to fill up Orlando Stadium which has approximately 40 000 seats – double that of the Dome.

In 2016, Cassper’s dream again became a reality when he indeed filled the Orlando Stadium, however, unlike his first mega concert – the tickets were not sold out, although they did get pretty close.

Now, almost three years later, The Tito Mboweni rapper achieved his dream last night and made South African history while he was at it.