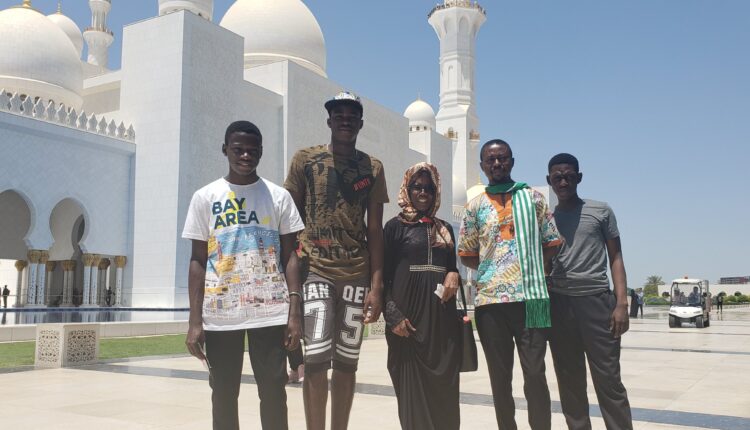 The winners of the 2019 edition of the National Science & Maths Quiz (NSMQ), St. Augustine’s College, in August 2019, enjoyed a trip to remember when they embarked on a 10-day all-expenses-paid educational tour to Nairobi and Dubai.

This was part of their grand prize for winning the prestigious high school competition.

The team left Accra for Nairobi on August 21, 2019, where they spent two days, touring the East African city and visiting The Giraffe Centre.  Among other things, the team joined in feeding some giraffes and listened to a lecture on giraffes – their birth, gestation, mating, life span and history in Kenya and across Africa.

After spending two days in Kenya, the team left for the United Arab Emirates, first arriving in Dubai, where the team spent a week.

In Dubai, the team enjoyed The Dubai City Tour with highlights of the Dubai skyline on Saturday, August 24, 2019. Notable landmarks visited included Burj Al Arab, the world’s most luxurious “7-star” hotel; Burj Khalifa, the world’s tallest building and the Dubai Mall, the world’s largest mall based on total area.

On Sunday, August 25, 2019, the team visited the Sharjah Science Museum, located in the Emirate of Sharjah, about an hour’s drive from Dubai. At the Science Museum, the team explored the science behind illusions, aerodynamics, cryogenics and physiology. The NSMQ Champions, along with the Quiz mistress, had a lot of fun seeing how some of the science concepts were presented in an easy-to-understand way. Later that evening, the team went to Dubai Marina for a traditional Dhow Cruise, where they enjoyed dinner and some Arabian shows on a two-hour cruise.

On Monday, August 26, 2019, the team visited the Dubai Aquarium and Underwater Zoo to see some aquatic species and mammals.  They witnessed sharks being fed, saw two crocodiles aged 40 and 80 years, many fish species, penguins and alligators. Later that evening, the team saw the breath-taking Dubai Fountain Show at the Dubai Mall and the Burj Khalifa display.

The tour continued on Wednesday, August 28, 2019 with the Desert Safari, which included Dune Bashing, Camel Riding and dinner in the middle of the desert. On Thursday, August 29, 2019, the team was in the Emirate of Abu Dhabi to visit the Sheik Zayed Grand Mosque, the UAE Heritage Village, Ferrari World and other parts of the city.

The tour ended with another visit to the Dubai Mall to watch the magnificent Dubai Fountain Show before preparing for the flight to Ghana.

Adansi Travels, a leading travel agency and Kenya Airways, put the tour together, in line with Primetime’s vision to make the NSMQ experience not just educational, but fun and exciting. Primetime is putting plans in place to make the 2020 edition of the tour even more exciting and educational for the beneficiaries.