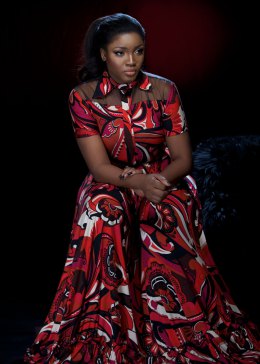 Going through Time’s 100 most influential personalities for 2013, one name struck me and that was Nigerian screen goddess, wife, philanthropist and everything Omotola Jalade-Ekeinde.

The screen goddess who could not hide her joy said in a tweet;

It’s the lord’s Doing and it’s marvelous in my eyes.

She will therefore be attending the Time100 Gala with a special guest on Tuesday April 23rd 2013.

The world’s most productive English-language film industry is not Hollywood but Nollywood. The teeming Nigerian cinema grinds out some 2,500 movies a year, mostly direct-to-DVD quickies mixing melodrama, music and an evangelical Christian spin. (Think Bollywood via Tyler Perry.) Employing a million Nigerians, Nollywood enthralls millions more who come for the thrills, the uplift and the artful agitations of Omotola Jalade-Ekeinde — the Queen of Nollywood.

Called OmoSexy by her fans, she has made 300 or so features, from the 1996 Mortal Inheritance to the 2010 superproduction Ijé, shot partly on location in Los Angeles. Married to an airline pilot she wed on a flight from Lagos to Benin, Jalade-Ekeinde brings a juggler’s grace to her roles as actress, singer, reality-show star, mother of four and philanthropist (the Omotola Youth Empowerment Programme).

Www.nydjlive.com congratulates you on this feat.