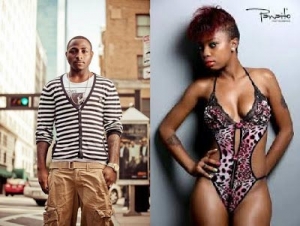 Just when all the bad news on Nigerian Pop Davido seemed to be settling, the musician has just been entangled again in a sex escapade in East Africa.

A ‘Kenyan socialite’ Staciey Brianar, popularly known as Pendois claims she slept with the young Nigerian singer the past weekend when the musician visited the country for a performance at the Bombaata Festival had other Nigerian acts like Ice Prince, singer Victoria Kimani and other Kenyan acts.

Pendo as she is popularly known is alleging she got to have a sexual encounter with the Davido hours after the concert ended, after they hooked at a Kenyan night club ‘Galileo’.

Pendo in a lengthy chat with a Kenyan blog narrated her experience with Davido.

‘I had my fun and made my way home ready for the big day as I said I was not worried, so there’s was no time in me hustling to go to the backstage as other girls did…no! I had my food ready to eat, after the event, my friend Deekay (HKN) buzzed me and asked me to turn up that he (Davido) was asking for me.

I made my way to Galileo with my girlfriends, I minded my own business until he spotted me and asked his DJ to come get me, I still had no rush to be seen hanging out with him or anything, so I sat down n had my drink that he offered’, she continues her story.

When it was time to leave the hangout spot, the organizers thought it best for them to leave in separate cars just to avoid the media. ‘So David paid for my cab that followed them directly to the hotel located in Hurlingham. When I got there, he sent his deejay (DJ Olu) to give me his key card to his room as he talked to someone. He escorted me to the room and the rest is self-explanatory’.

Pendo’s allegation has however met a lot of opposition as she is known for allegations justto get mentioned on blogs and social network.

Pend described her alleged sexual encounter with the young pop star, revealing Davido is one of the best she’s ever done it with, describing him as ‘Perfect’.

Davido’s manager Kamal in an interview has denied the story and explained that they were forewarned by publicist of the show about the girl and insists Davido had no contact with the said lady.

Taraji P. Henson Is Considering Leaving The US And Living In Another Country