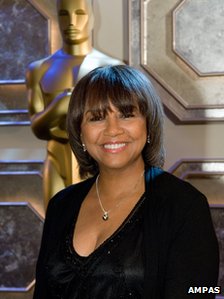 She is the first woman to hold the post in three decades.

In a long marketing career she has overseen campaigns for films including Forrest Gump and Braveheart.

Boone Isaacs has represented the public relations branch of the Academy for 20 years and has served as vice president of the academy.

She has been elected for a one-year term but can serve four successive terms. She succeeds Hawk Koch, who was ineligible for re-election.

Presidents are allowed to serve up to four consecutive terms as long as they are on the AMPAS board, but Koch had reached his nine-year limit as a governor.

Boone Isaacs currently runs CBI Enterprises, where she been involved in the marketing for films including The Artist, The King’s Speech and Precious.

In a previous role as executive vice president of worldwide publicity for Paramount Pictures, she was behind the publicity campaigns for best picture winners Forrest Gump and Braveheart.

She has also previously served as marketing president at New Line Cinema.